US reacts to Biden being named presidential-elect 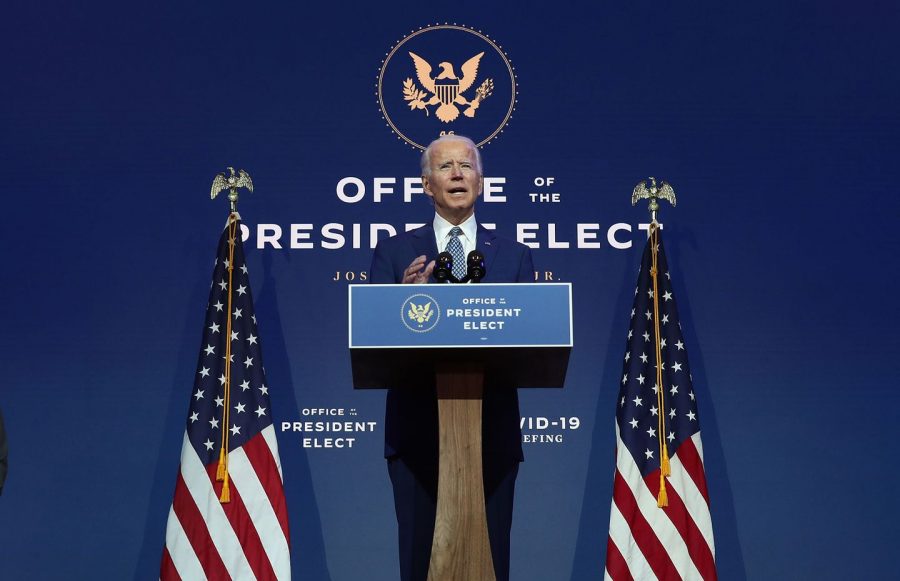 While Donald Trump is still arguing about the integrity of this election, it seems like the clear winner in Joe Biden.

On Nov. 7, crowds erupted upon hearing the news that Joe Biden had captured the presidency. Dancing filled the streets. People on both sides shed tears. Historic gains were made.

Many notable news sources called the presidential election which resulted in Biden being named president-elect. AP News explained that “it became increasingly clear that Democrat Joe Biden would oust President Donald Trump from the White House. Late-counted ballots in Nevada, Pennsylvania, and Georgia continued to keep Biden in the lead and offered him multiple paths to victory.”

Saturday night, amidst the widespread celebrations, President-elect Joe Biden addressed the divided nation with his victory speech, asking Trump supporters to give him a chance, and calling for all Americans to move on from what he described as “a grim era of demonization.”

He noted that he initially ran for president to “rebuild the soul of America, to rebuild the backbone of this nation, the middle class and to make America respected around the world again.” He then acknowledged that Black voters carried him dramatically helped him win in the primary and general election by the increased turnout in key battleground states.

Meanwhile, Trump repeated falsehoods on Twitter saying he “WON THE ELECTION” and claimed that “bad things happened” in the election that his poll observers weren’t allowed to see.

I WON THIS ELECTION, BY A LOT

Trump’s campaign team has been disputing the election results in lawsuits, all of which have been immediately shut down due to lack of credible evidence of voter fraud that would alter the outcome of the race.

“I will not rest until the American People have the honest vote count they deserve and that Democracy demands,” Trump said in a statement Saturday after the race was called.

While Trump may not accept that he has lost, many world leaders did on Saturday as they sent congratulatory messages to Biden and Harris.

In a sign of how quickly global realities shift after an election in the United States, some leaders who had made alliances with Trump rushed to congratulate the President-elect.

Carlmont students were also quick to react to the news. Cori Nicholson, a junior, said, “I think it’s a huge step to have a woman, and a woman of color at that, as a Vice President but I think it’s important to hold her and Biden accountable for their promises and not forget their past mistakes.”

Nicholson brought up the historic nature of Kamala Harris being named Vice President-elect. With her ascension to the vice presidency, Harris will become the first woman and first woman of color to hold that office, a milestone for a nation in upheaval, grappling with a damaging history of racial injustice exposed, yet again, in a divisive election.

In her victory speech, once multiple news networks called the election, she spoke of her mother and the generations of women of all races who paved the way for this moment. “While I may be the first woman in this office, I will not be the last,” she told a cheering audience, “Because every little girl watching tonight sees that this is a country of possibilities.”

Nicholson also said, “I think Biden has a really great chance at erasing some of the division the Trump candidacy encouraged, but he still isn’t perfect and has to be held accountable for the promises he made.”

Ultimately, Joe Biden will be the 46th President of the United States, promising to be “a president who seeks not to divide, but to unify. Who doesn’t see Red and Blue states, but the United States.”