‘Ready Player One’ is a look into the future 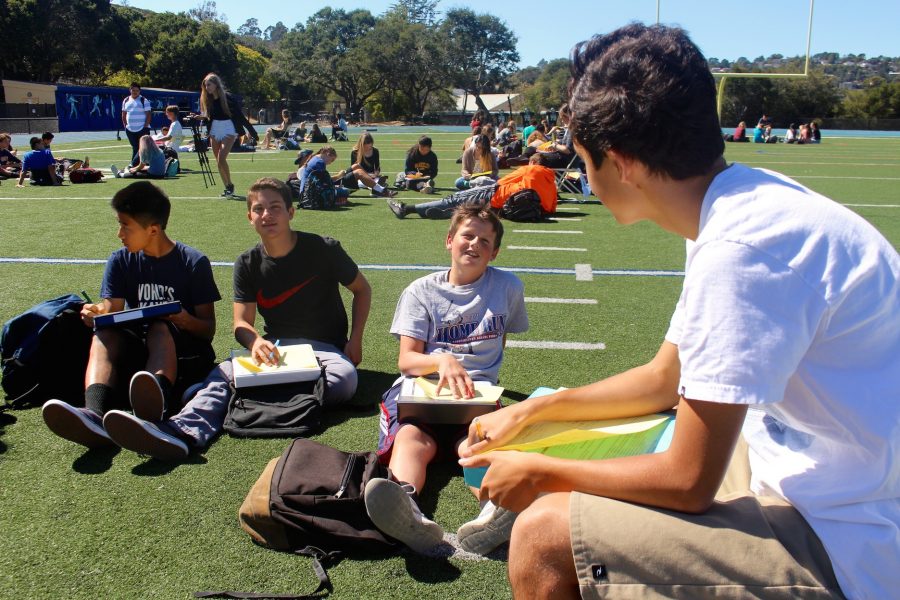 Students gather on the field to discuss their thoughts on "Ready Player One."

In the sea of dystopian novels starring moody teenagers, “Ready Player One” by Ernest Cline bobs uniquely above the surface. Cline illustrates the near future through the eyes of average teenager Wade Watts, portraying a destitute world where citizens’ only salvation is an alternate reality accessed through an internet server: the Oasis. The virtual universe acts as a literal oasis for the common human in a poverty-stricken world.

Considering how much people rely on the internet for a distraction today, the premise is completely fathomable. I appreciate how the book addresses the flip side of common opinions about the internet, and how one is able to relate to one or more strong secondary characters. There were some shortcomings, but overall I was pretty dazzled and enjoyed the book.

The time at which Cline sets this novel is especially interesting because the world is in 2044, but the plot is centered around the 1980s. It almost acts as a bridge to this point in time, linking what looks likely to be our gloomy future to a snapshot of pleasant, simpler times in America’s past.

Cline describes this depressing world in insane detail, from the pixelated people down to the decrepit living conditions. He demonstrates his obvious creativity with his beyond obscure references to ’80s pop culture and the mysterious motivations of the late tech genius Halliday.

However, Cline goes so overboard in the detail that it’s almost overwhelming. Granted, reading the story feels like living the story and seeing the story, but it also slowed down the pace of the book. The plotline not only progresses at an agonizing pace, weighed down by imagery, but it also diminishes the relationship between the narrator and the reader. It doesn’t really provide enough leeway for the reader to bond with Watt over his feelings and thoughts because the novel is so overpowered with description.

Watts’s lack of a home life gives him automatic sympathy with the reader. As a result, Watts’s friends in the Oasis are like family to him. This goes against the conventional view of a family, showing that one can be comprised of non-blood relations.

The fact that the relationships are created through the internet challenges the common belief that anonymity on the internet is always dangerous. Anonymity teaches Watts to value his friends for their personalities and skills rather than who they may be in the real world.

As diverse as the secondary characters’ backgrounds are, their skillsets are virtually the same. Pun intended. They are all strong in their own ways, having worked through hardship to get to success. And still, they are supportive of each other despite sharing the desire to win the same video contest.

They’re so well-written and have such compelling independent lives that I almost wonder what their stories are instead of Watts’s, but I also don’t because they’re all computer nerds and ’80s geeks, and there’s only so much of that I can take.

I was overall thoroughly impressed by Cline’s writing, creativity, and unique premise. “Ready Player One” is definitely not a book for everyone, but if you like pop culture, video games, deep themes, and technology you’ll enjoy this novel.