Rebecca Pearlman has taught it coast to coast 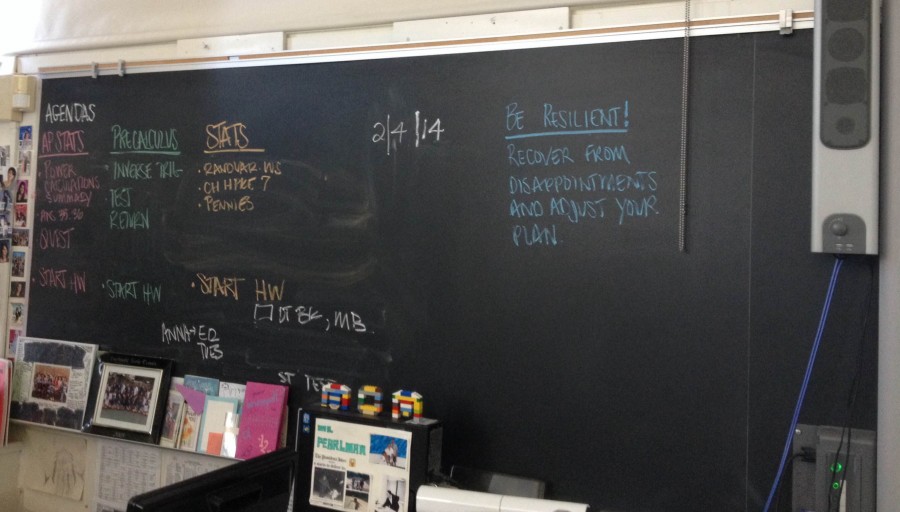 Pearlman's chalkboard full of homework reminders for her three classes.

While walking down the E-hall wing, one can hear the passionate voice of math teacher, Rebecca Pearlman, compelling her students to be “contenders” and set their best foot forward.

Pearlman’s professional journey has made her into the dedicated and enthusiastic teacher she is today.

Pearlman started teaching 22 years ago in New York and later moved to San Fransisco. She noticed many differences in the education systems between the two coasts. She said, “When I taught in New York, students took state regents exams in June. This score was part of their final exam grade.”

This may seem very different from the California standards. She said, “Students needed to show minimum proficiency in order to go on to the next level in math. This meant that students almost always had the proper placement in math courses.”

After moving to San Francisco for a teaching position, Pearlman was not given an assignment immediately. She said, “Although I had a job, I didn’t know where I would be teaching until a couple weeks before school.”

While this may have worried some, Pearlman was confident and understanding. She said, “the district had to deal with placement of the teachers with tenure who requested transfers before I was assigned to a specific school.”

As a very motivated and committed teacher, Pearlman expects the best from her students and leads by an example. She recalled that she has only been tardy twice in her entire 22 year teaching career. “The first time was tardy was my first week of school and I thought I had time during my prep period to run to a local bakery before class,” said Pearlman.

She also reminds her students of her second tardy, while giving valuable life lessons. She said, “The second time, I was tardy to my 7:30 class because I slept through my alarm.”

However, Pearlman sets an example for her students and said, ”I was resilient and learned from my mistake, now I set two alarms.”

Pre-Calculus student and junior Julia Semmler said, “She is so helpful. Even when you don’t get the equation right at first, she appreciates your effort.”

Pearlman’s teaching style proves to keep all of her math students engaged and involved. “She keeps math interesting and truly cares about her student and their success,” said one of Pearlman’s students junior Frieda Freeman.

A passion for Carlmont, math, and teaching has made Pearlman into the educator she is today. “I love how the math department works together. I also love all the support I get from the admin team. This helps me be a better teacher than if I did not have this support,” said Pearlman.