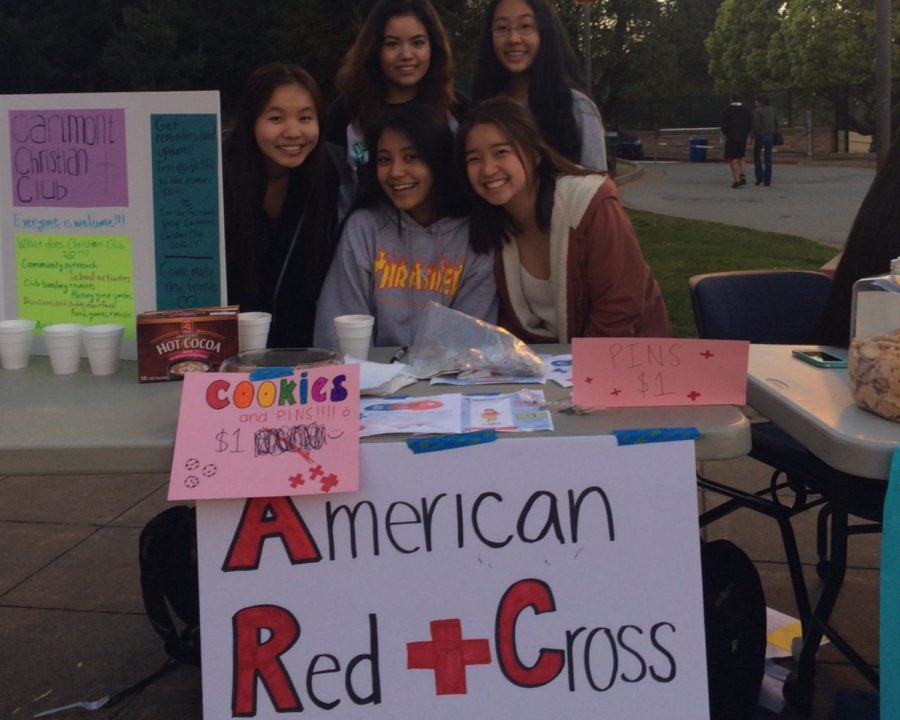 Red Cross Club members have their station set up at the club fair. They promoted the importance of getting vaccinated by selling pins to the student population.

Carlmont High School’s Red Cross Club plans to increase safety awareness and support even more people in need this school year. They plan to widen their bases with opportunities to volunteer off-campus, and there will be events to provide aid to local issues.

Carlmont’s Red Cross Club is affiliated with the international American Red Cross organization, founded by Clara Barton on May 21, 1881 and is still active today. Their main purpose is to “prevent and relieve suffering.”

Hazel Lam and Stephanie Wong have been co-presidents of the school club for the past two years.

In the 2016-17 school year, the club completed two initiatives: the Measles and Rubella Initiative and Mail for Heroes.

Mail for Heroes was an interactive event, which allowed students to make a direct, positive impact on others.

“We set up a booth near the quad and had a card making station for people to stop by and make a card for veterans. It was near the holidays so there were holiday cards, as well, and ended up making 75 cards,” said Wong when telling about an event called Mail for Heroes, which took place last school year. In addition, Lam said: “We also did card making during our meetings.”

Another project that the club began was the Pillowcase Project, which remains a focus of the club for this school year.

“Last year we got everyone trained. It’s a project where we [as a club] go around to daycares and schools, mostly targeting third and fourth graders. We teach them about disaster preparedness. We have them make a kit in a pillowcase so when a disaster does happen, they can be prepared,” said Wong when explaining the process of the Pillowcase Project.

The club is working towards finalizing training for all members of the club so they can continue interacting with the community on this initiative.

Additionally, in response to the fires that broke out in Northern California on Oct. 8, American Red Cross has taken action to help those who have suffered. Carlmont’s Red Cross Club is also planning a fundraiser to help.

“Since there is a lot of restriction for volunteering, we are planning an off campus gift wrapping station at Hillsdale Shopping Mall. The money we fund-raise is going be donated to American Red Cross. This will happen during the holiday season and will be dedicated to the [recovery from] North Bay fires,” said Lam.

The club officers stress that the point of their club and affiliation with the Red Cross organization is to provide opportunities for people to volunteer their time and help others while meeting others and getting involved with local communities.

“My favorite part is being able to do things in order to help others get aware about certain diseases or events that are affecting many people,” said Alisha Zhou, an active member in the Red Cross Club.