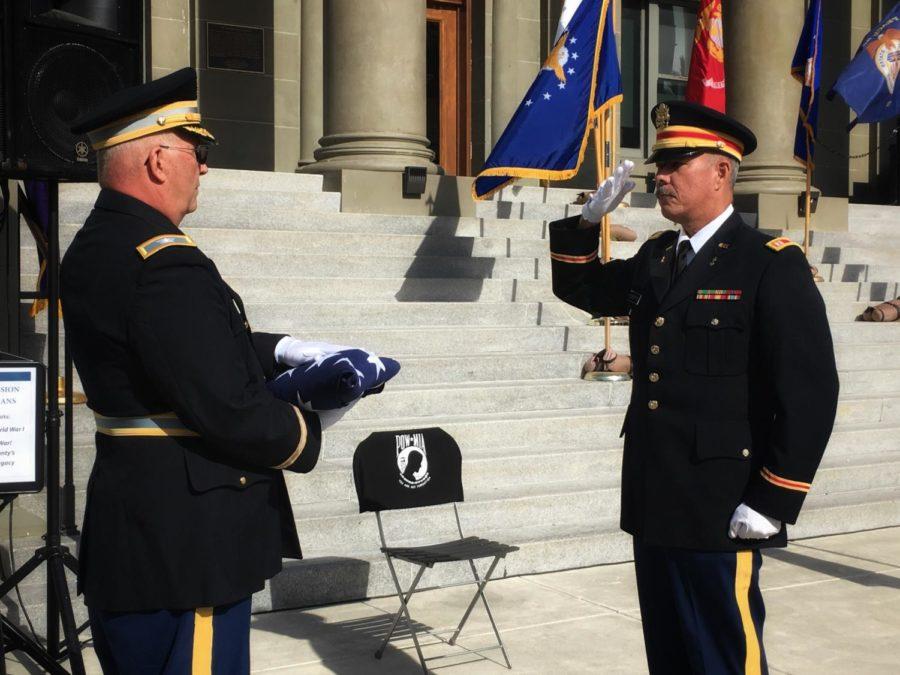 The Flag-Folding Ceremony is one of the many events held at the Redwood City Celebration honoring the military service of men and women in the United States.

Redwood City held its second Veterans Day Celebration to not only thank veterans but also honor the ones serving our country and the families that support them on Nov. 11.

Though there were still empty seats at the Redwood City Courthouse Square, many of those who attended were moved by the ceremony. The music performed by the West Bay Community Band and Ragazzi Boys Choir, along with the words of several speakers, reminded listeners about the men and women who protect our nation each day.

During his speech, retired Admiral James O. Ellis Jr. said, “It takes immense courage to serve. Whether on the frontlines or miles away from the public spotlight, these men and women are protecting American lives and way of life. But we cannot forget the families who help support the men and women who serve our nation.”

From quoting the words of Martin Luther King Jr. to sharing his personal experience and memories of those who served along with him, Ellis delivered a speech that made some smile and others tear up in remembrance of their loved ones.

Though there were only a handful of veterans that attended, crowds clapped for each veteran as they stood up during the Military Melody and Armed Services Recognition.

“It’s a great honor to be here today,” said Bob Page, one of the veterans who attended. “[Veterans] are not generally appreciated, but seeing events like these make me happier.”

Page also noted that he wishes to see more patriotism at schools and hopes that veterans will receive the care and respect that they deserve.

The majority of the visitors did not serve in the army. However, even the mayor of Redwood City, John D. Seybert had a personal connection to Veterans Day.

”It was such an honor to receive the flag [during the Flag-Folding Ceremony] today,” said Seybert. “Although I personally haven’t served, my father was a World War II veteran and several of my friends have served so [Veterans Day] means a lot to me.”