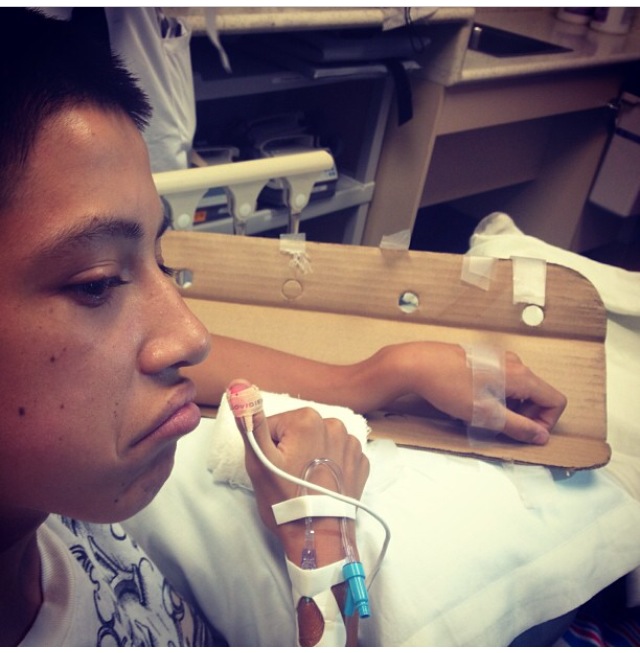 Canyon Regan at the hospital post-fracture.

Regan was running the ball at practice when he was tackled, snapping his arm.

“It was really tough to see my brother go through that,” said senior and varsity football player Dakota Regan.

Despite the injury, the team had to go on, missing their key position, punt returner. Canyon Regan was forced to watch his team from the sidelines his first high school season.

“It was pretty bad, but I wasn’t complaining too much because I didn’t have much game experience,” said Canyon Regan.

Canyon Regan bounced back this year having a great opening game against Yerba Buena High School.

“Canyon is a God. He caught two interceptions the first game, and he is one of our star players,” said sophomore and JV football player Brenan Lasala.

After struggling with a broken arm last year, Canyon Regan faced another setback after dislocating his knee early this season. This occurred after the first game at practice, causing him to miss three games.

“I should be back ready to play next week,” said Canyon Regan.

Canyon has high expectations for himself and the team this season.

“I want to have a winning record and hopefully beat Sequoia. For myself, I want to get as many touchdowns and interceptions as I can,” said Canyon Regan.

The injury of last season still lurks in the minds of the of the team. Most of the players have never seen anything like it before.

“It was frightening to see someone’s arm snap like that, and an ambulance actually had to come on the field. I will never forget that,” said Lasala.

Canyon Regan has put the incident of last year behind him and is focused on the season this year.

JV football will be playing next at Carlmont against El Camino High School on Friday, Oct. 10 at 4 p.m.