Remembering the defeat of the Briggs Initiative 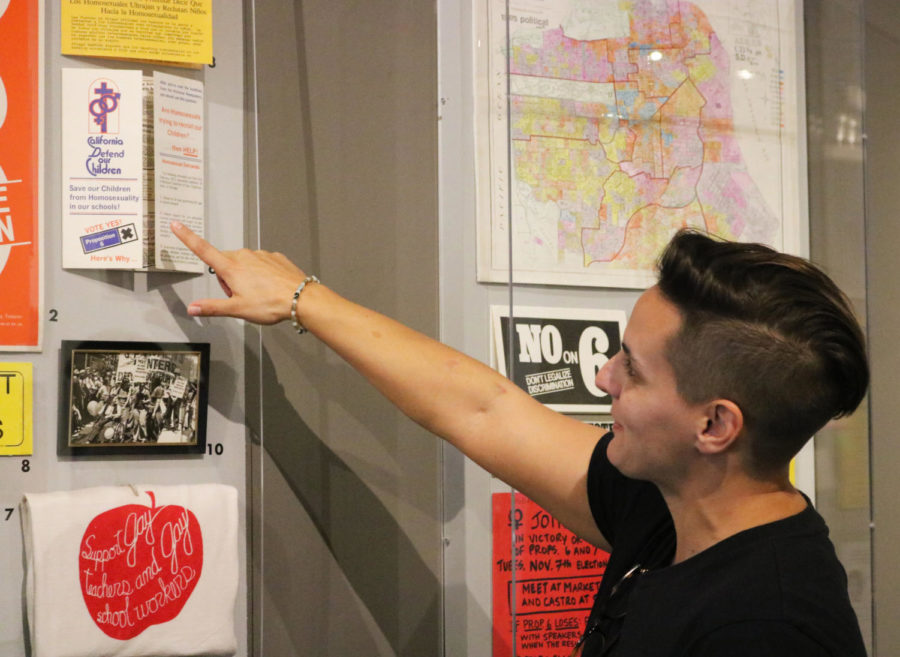 Christina Webb points to a pamphlet used by Anita Bryant's Save our Children campaign.

On Tuesday night, the nation was yet again divided into red and blue in what many have called the most crucial midterm election of our lifetime.

However, this November was not the first time midterm tensions were high.

At least not for California.

In 1978, California State Sen. John Briggs placed an initiative on the ballot that would have banned any homosexual teacher or supporter of gay rights from teaching in public schools.

Briggs’ Proposition 6, otherwise known as the Briggs Initiative, met its defeat at the hands of grassroots activists such as Harvey Milk, Sally Gearhart, Bill Kraus, and hundreds of others.

More than one million people voted against the measure, and its defeat marked the first time an anti-gay measure was rejected in U.S. history.

To commemorate the 40th anniversary of this milestone, the GLBT Historical Society in San Francisco opened a new exhibition called “The Briggs Initiative: A Scary Proposition,” recounting the story of how a group of activists fought back against a wave of homophobic ballots that swept the nation.

Sue Englander, a co-curator of the exhibition and veteran of the anti-Briggs Initiative effort, believes that while the movement happened 40 years ago, it continues to be relevant today.

“This exhibition will bring a scary time for LGBTQ people zinging back for those of us who were there, reminding us that we can fight the forces of anti-LGBTQ discrimination and win even against long odds,” Englander said in a press release. “And if you weren’t here 40 years ago, the story will sear itself into your consciousness. The differences between 1978 and today aren’t as big as they may look.”

From posters, buttons, flyers, photographs, and other pieces from the archives of the GLBT Historical Society and the San Francisco History Center of the San Francisco Public Library, the exhibition tells the story of the fight against Briggs captivating the eyes of visitors such as Christina Webb and her wife Jewelana Wilson.

“Looking at the different kinds of publicity and how homosexuality was displayed on posters was alarming,” Webb said. “A lot of them talked about the ‘recruitment process’ and the fear that children were in danger of ‘becoming gay’ from being exposed to homosexual individuals was pretty alarming because we’re around a lot of kids.”

Both Webb and Wilson have worked as educators for children and young adults, and while the two are protected under anti-discrimination laws in California, this is a privilege not all Americans have.

In fact, Webb’s home state of Minnesota is one of the 28 states where LGBTQ teachers are, for the most part, unprotected from discrimination based on sexual orientation.

“We just went back to St. Louis five months ago because that’s where my wife [Webb] is from and we found out that one of our friends or her friends that she had grown up with was fired for being out and openly gay,” Wilson said.

As members of the LGBTQ community continue to fight against discrimination, the Briggs Initiative continues to serve as an inspiration to many.

The No on Briggs movement fought back against the wave of homophobic campaigns initiated by Anita Bryant’s effort to repeal the Miami-Dade County gay rights law. But where she succeeded, Briggs would fail.

Paula Lichtenberg, co-curator of the exhibit and former co-chairman of the Bay Area Committee Against the Briggs Initiative, worked alongside other grassroots groups in a manner that helped revolutionize the gay rights movement.

“Before the campaign, people didn’t talk about homosexuality,” Lichtenberg said.”When Anita Bryant started her anti-gay campaigns, homosexuality was suddenly was in the news all the time.”

To fight against the spread of homophobic messages, activists fought back by coming out.

“Statistics showed that if people knew a gay person, they were more likely to vote No on 6, so people were urged to come out to family and friends, co-workers and other people they interacted with,” Lichtenberg said. “The Yes on 6 campaign’s big storyline was that gays were molesters and recruited children into homosexuality, both of which should prevent them from being teachers. We spoke to people and handed out pamphlets showing that these myths weren’t true.”

Though she, along with many other members of the LGBTQ community, continue to face discrimination, Wilson believes that the men and women of the ’70s helped pave the way to a more empathetic and progressive society.

“One of the [pieces] that got to me was the poster that said ‘You don’t have to gay to be a friend,’” Wilson said. “That’s what’s important now, changing from an apathetic culture into an empathetic culture where we’re feelers and not shamers.”

The exhibition runs through January 20, 2019, and admission to the Historical Society is $5 for non-members and $3 for students.