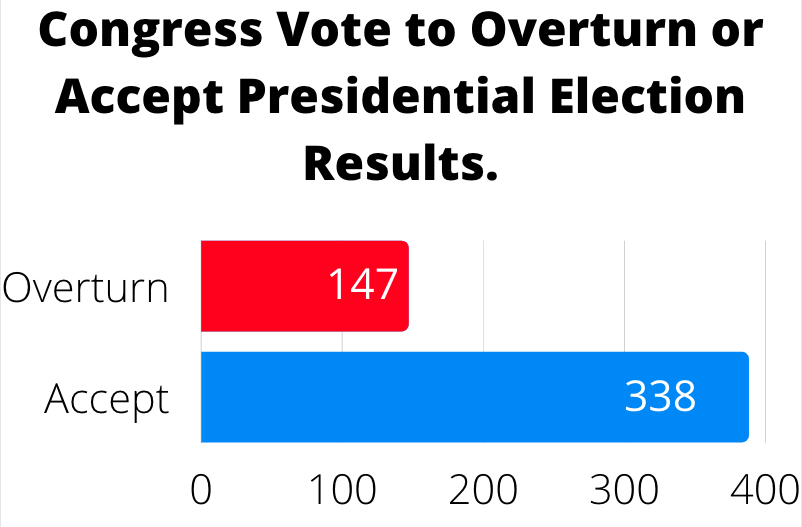 The recent Congress vote on whether to confirm or reject the outcome of the presidential election resulted in 147 Republican members voting to reject.

After the unprecedented Capitol riot two weeks ago, President-Elect Joe Biden’s victory in the 2020 election was confirmed by Congress.

These Congress members are facing condemnation from the people, corporate America, and their colleagues in both parties in Congress.

To many Americans, a democratic presidential election is the basis of what the country stands for. These people see the wish to undo the election results as acts against the country itself.

This is an example of efforts in Congress to punish members who voted to overturn the results.  Some Democrats wish to go even further and prevent these Congresspeople from having their names on any bills passed.

And Democrats aren’t the only ones condemning or suppressing Congress members who voted against the election either.  Senate Majority Leader Mitch McConnell has also spoken out against his fellow party members.

“We’ll either hasten down a poisonous path where only the winners of an election actually accept the results or show we can still muster the patriotic courage that our forebears showed, not only in victory but in defeat,” McConnell said.

With other Republicans joining in support of McConnell, the condemnation of Republicans who voted against the election results is surprisingly bipartisan.

Many constituents of the Congress members who rejected election results are requesting the removal of their representative from office, supporting the efforts of other Congresspeople.

In St. Louis, Missouri, protests are calling for the resignation of Sen. Josh Hawley, a Republican Congress member who voted against the results of the election.  Many other states are facing similar situations.

Winston Singh, a moderate Carlmont sophomore, agrees with these petitioners.

“People who voted to overturn the election should be ashamed of what they have done, going against the foundations of our democracy,” Singh said.

Much of corporate America has added its approval to efforts in opposition to those who voted to overturn the election.

Numerous companies have removed financial support from Congresspeople who opposed the election results or from all politicians as a whole.  Notable companies include Google, Microsoft, Facebook, Amazon, and Disney.

However, the Congress members themselves are adamant that they have done nothing wrong.  Instead, they posit that they were only doing their duty.

Rep. Madison Cawthorn of North Carolina, who faced harsh criticisms from his constituents, responded by insisting that he had a Constitutional duty to vote against Biden.

While there have always been Congress members who have voted to annul an election’s results, it has never been to this scale.

The refusal to accept the election results has worked in tandem with the growing split between Democrats and Republicans both in the government and among the people to cast doubt on American democracy’s future.

Ethan Htun, a sophomore at Carlmont High School, is among those who feel this uncertainty.

“Rejecting a fairly conducted election with only inconsequential ‘proof’ suggesting otherwise sets a terrible precedent that threatens the longstanding norm of a peaceful transition of power,” Htun said.