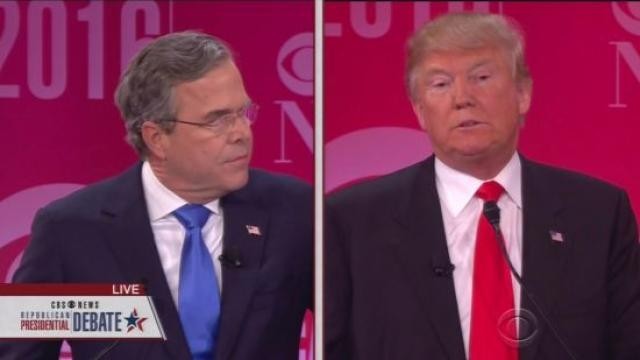 Jeb Bush responds to Trump's allegations about the lies of George W. Bush.

In 2016, the GOP debates have achieved the highest ratings throughout history. According to CBS, who hosted the most recent debate, over 13.5 million Americans tuned in.

Viewers are attracted to these debates because they believe that they will gain knowledge of these presidential candidates’ policies and beliefs on social issues. However, the Feb. 13 debate in South Carolina hardly accomplished this goal. In fact, it  confused voters more than it informed them.

Packed onto a small stage with barely a yard of space between them, Republicans expressed their thoughts on America’s politics and economy, ventilating their anger. Tired and belligerent with the other candidates, GOP members – specifically Donald Trump, Marco Rubio, and Ted Cruz – took sticks and poked each other in every possible manner.

Topics ranging from the fault of the Bush administration, to the failure of Obama’s health plan, and to cheating campaign maneuvers all resulted in one conclusion — someone was lying.

Throughout all the scuttles on the stage and the confused surgeon who obviously did not understand what he was talking about, it was prevalent that everyone was lying about something.

“He lied about Ben Carson in Iowa. He lies about Planned Parenthood. He’s lying about all sorts of things,” said Marco Rubio in response to Ted Cruz.

However, the one who emerged from the debate the least unscathed was billionaire Donald Trump.

Despite being pummeled by other candidates, Trump easily repelled accusations of his history of conservatism. Meanwhile, he responded by placing the blame on the Bush administration.

“They lied about there being weapons of mass destruction [in Iran], and they knew there were none,” said Trump.

Arguing that George Bush had lied about WMDs being present in the Middle East in order to justify invading other countries, Trump placed the pressure on Jeb Bush.

But once again, Trump was later attacked by Cruz and Rubio.

“You are the single biggest liar,” said Trump to Cruz  on the issue of Planned Parenthood. “You’re probably worse than Jeb Bush.”