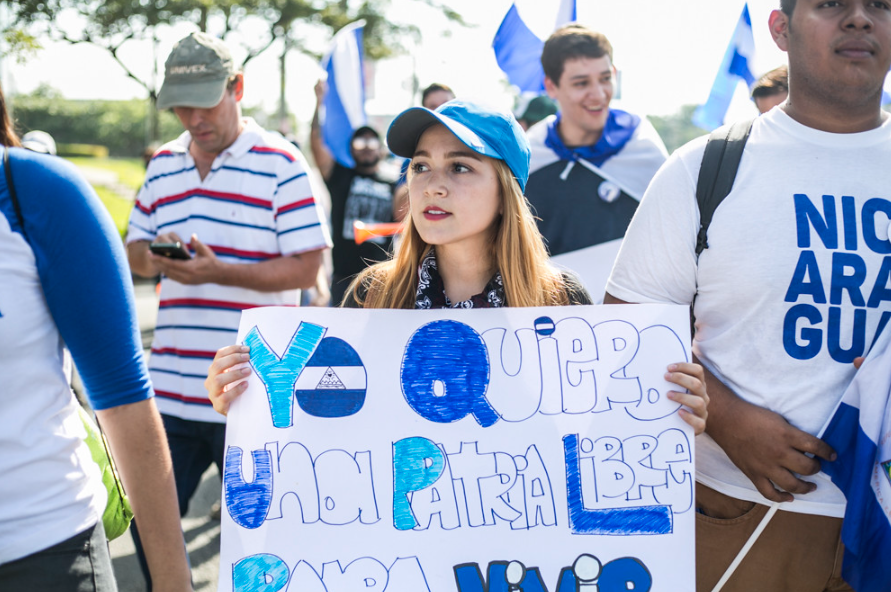 A protester marches in Managua, echoing calls for a "free homeland."

Journalists, inside and outside of the country, have run into similarly oppressive policies. According to the Latam Journalism Review, 61 cases of violence against journalists were documented between December 2019 and February 2020, along with 338 cases of press freedom violations between January and November 2020.

With police raids on the leading newspapers in the country, namely La Prensa, Daniel Ortega has sought to use military power to repress free speech. Nice described the broad implications of Ortega’s actions.

Nice said, “Opposition in Nicaragua was deeply divided coming into the elections, and he could have divided and conquered, but he didn’t do it that way. [Ortega’s approach] tells us that he feels emboldened enough to take those actions, that he has the right and capability to do this without any serious repercussions.”

One notable presidential candidate, Cristiana Chamorro Barrios, daughter of former president Violeta Barrios de Chamorro and a political opponent of Ortega, was detained by the government in the summer months. According to the AP, Chamorro was captured in a “violent raid” on June 2 at her home one day after the government formally filed money laundering charges against her, preventing her from participating in the election.

Chamorro also acted as the vice-president of La Prensa, the aforementioned news publication that has faced increasing censorship and criticism from the Ortega administration, prior to the detention.

According to Nice, opposition leaders have been held captive, “beaten up, tortured, and poorly fed.” Not only has Ortega waged a physical war against these opponents, but his increasingly dominant ideological movement has begun to dominate Nicaragua.

With such complete control and little information shared internationally, some have questioned the reports from Nicaragua. While it is undisputed that Ortega is taking control, some have contended that opposition groups are exaggerating the reports of political repression.

When asked if the media coverage of the arrests was accurate, Nice said, “I think [that the attack on the opposition leadership] is being portrayed as catastrophic as it is.”

Moreno offered a different point of view, noting that Nicaragua is not a completely restrictive country, despite the fact that political discourse has been used to justify the “treasonous acts” of many of Ortega’s opponents.

Moreno said, “I don’t want to project this image that you can’t say anything in Nicaragua. The opposition is actually pretty vocal. Looking from the outside in, I think that it is important that we don’t exaggerate this idea that nobody can say anything in Nicaragua. It actually has a pretty vibrant political dialogue. That dialogue reaches its limits once you become a threat.”

In speaking to why the overwhelming media portrayal of Nicaragua is that of a completely totalitarian government, Moreno referenced the interests of the opposition groups.

“If you are in Nicaragua, I do think there is a vested interest in not just highlighting the totalitarian elements of Ortega, but also magnifying them,” Moreno said.

Despite this, Moreno still wanted to emphasize the severity of the current situation.

Moreno said, “Once you act in a way where you prevent political opponents from running for an election where it should be free and open, that’s where we need to draw the line.”

In terms of the election, public distrust in the government played a role in the level of participation. Along with the expectation of low voter turnout rates, Nice noted that “everybody knows that the elections are going to be rigged, that the elections won’t be free.”

For Martinez, voting when there are no viable democratic options seemed to be pointless.

In advance of the election, Martinez said, “Because there are no honest candidates or political parties representing the people, the level of abstentionism throughout the country will most likely be very high.”

Despite statements from the Nicaraguan government touting a 65% turnout rate, civil electoral observatory group Urnas Abiertas said abstention rates averaged about 81.5% across the country — amounting to a boycott of the electoral process that Martinez expected.