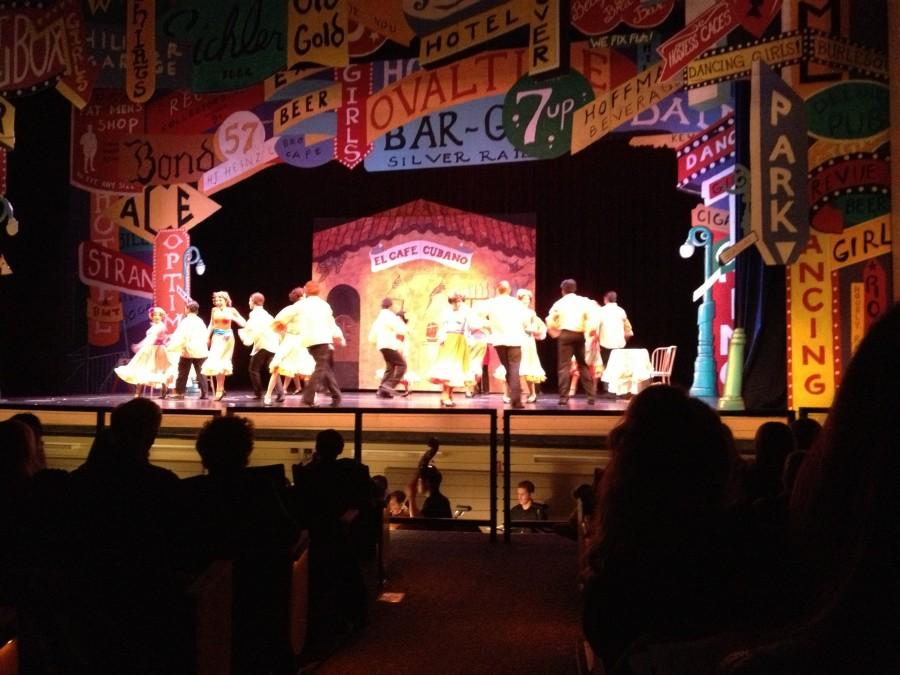 The ensemble dancing in Havana

The blue curtains opened last night, and so did Carlmont’s production of the musical Guys and Dolls.

Carlmont’s production of Guys and Dolls was a great representation of the Broadway musical which originally debuted on Broadway in 1950. Set in the 1920s and 1930s in New York, Guys and Dolls is a story about gangsters, gamblers, and missionaries and their trials in the Big Apple.

Carlmont junior Sarah Burry stated that her favorite part about the show was how unbelievable the stage chemistry was between the lead roles of Sarah Brown and Sky Masterson, played by Laura VanArsdel and Tim Gachot.

Burry added that their “talent by itself is amazing, but combined it is explosive.”

The cast featured many experienced performers, as well as a few newbies. Carlmont freshman Pyper Hayden, who played the role of Mary Lou Albright, said that she wasn’t at all nervous for the show, since this will be her 11th production, although her first at Carlmont.

The show was filled with upbeat 1920s style music and incredible dancing to accompany the great vocal talents of numerous Carlmont Students.

While the Carlmont Performing Arts Center wasn’t quite a full house last night, it is expected to sell out for the remainder of the shows, as many Carlmont students and their families plan on going to support their friends.

The audience was entranced by the talents of the students on stage. Burry also commented that she “loves watching [her] friends perform in [the shows], because they surprise everyone with their level of professionalism in every show.”

Despite the length of the show being almost three hours, once again, Carlmont has put on another production that is definitely worth going to see.

Tickets can still be purchased at carlmontmusic.com for performances at 7pm Friday, Feb. 8, Saturday, Feb. 9, and a Sunday matinée on Feb. 10 at 2pm.