Roe v. Wade could be first of many precedents to fall 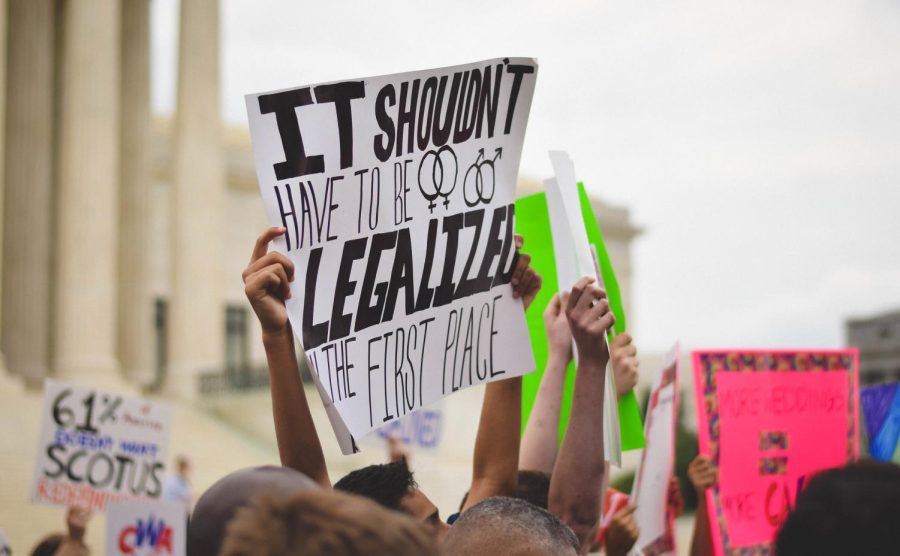 Demonstrators celebrate outside of the Supreme Court in 2015 after the release of the Obergefell v. Hodges decision.

In a month or so, the landscape of abortion rights could be fundamentally changed. The initial Supreme Court majority opinion, penned by Justice Samuel Alito and leaked by POLITICO, could result in the reversal of the landmark Roe v. Wade (1973) case and would provide a legal platform for the implementation of abortion bans across the nation (some of which are already being pursued).

“The leaked draft of the Supreme Court opinion in Dobbs v. Jackson, a case primed from the outset to overturn Roe, must be a wake-up call. We’re at a dangerous, unprecedented moment. This court is the most extreme and out-of-step in decades, and they have shown us where they want to go on abortion rights,” said Sarah Warbelow, the legal director for the Human Rights Campaign (HRC).

Furthermore, these groups also called attention to the potential consequences of such a decision.

“The devastating consequences of [overturning Roe] will fall most heavily on Black, Indigenous and other people of color, immigrants, people living in rural communities, LGBTQ+ people… among other marginalized groups. It will also broaden inequities in access to care from state to state,” said Arneta Rogers, Director of the Gender, Sexuality, and Reproductive Justice Program, via a press release for the American Civil Liberties Union (ACLU) Foundation of Northern California.

On the other side of the coin, pro-life groups, such as Americans United for Life, lauded the draft decision’s content.

“We stand alongside all Americans who have waited so hopefully and for so long for the Supreme Court to reverse Roe, to set America on the path to abortion abolition, and to restore justice to our nation,” said Catherine Glenn Foster, President & CEO of Americans United for Life via a press statement.

This division can have serious political consequences. A fractious topic that largely splits along religious, political, generational, and ethnic lines, abortion is a make or break issue for almost one-fourth of American voters, according to Gallup. Moreover, with the impending decision on Dobbs v. Jackson Women’s Health Organization, the result is likely to motivate more Democrats to vote in the 2022 midterms, given Alito’s opinion is a sign of things to come.

The decision isn’t final until the official decision is released, which is expected to be in late June or early July.

In the meantime, abortion rights groups and pro-life groups have mobilized in support of their respective positions, pressuring the Supreme Court and legislators in Congress and their respective states to take action.

Besides the direct impact on abortion rights, Alito’s leak also insinuated a possible forthcoming challenge to other precedents. Buried within the 98-page draft decision, Justice Alito explicitly calls out two Supreme Court precedents (Obergefell v. Hodges and Lawrence v. Texas) as not protecting rights that are “deeply rooted in history.”

Obergefell v. Hodges (which protects the right for same-sex couples to marry) and Lawrence v. Texas (which legalized sodomy) were momentous in terms of greater national LGBTQ+ acceptance. But Alito dissented on Obergefell v. Hodges, and he threatens to lead the charge to overturn that decision, which he has derided as an attack on religious freedom, once more.

Behind Alito’s majority draft opinion lies an important implication: Obergefell v. Hodges, much like Roe v. Wade, relies on the inferred right to privacy afforded to Americans by the 14th Amendment and therefore could be at risk. The legal arguments made in amicus briefs submitted last year by the ACLU and a bevy of constitutional scholars focused on the legitimacy of Roe via the Fourteenth Amendment’s “Due Process Clause,” an aspect of the law that similarly supports the ruling in Obergefell.

And while some legal scholars believe Obergefell v. Hodges to be in little danger should Roe v. Wade fall, the fact still remains: LGBTQ+ rights in America were built on the same foundation that upheld the right to abortion.

In a summary of the briefs provided by the Center for Reproductive Rights, the organization wrote that “[if] the Supreme Court were to overturn Roe and Casey, it would also call into question dozens of other liberty decisions beyond abortion,” such as Obergefell, which was cited eight separate times in the constitutional scholar’s brief.

HRC’s Warbelow outlined the effects that overturning Roe could have in the immediate future.

Warbelow said, “[If Roe is overturned, it] encourages state lawmakers pandering to the base to test the limits of court recognized LGBTQ+ equality.”

Yet, in California, the preemptive fight for abortion rights has already landed a significant blow. On May 11, Gov. Gavin Newson announced a comprehensive legislative package that included an expansion of abortion rights and benefits to businesses who leave anti-abortion states.

These advancements have been celebrated by pro-abortion groups. Despite the Supreme Court’s looming decision, Rogers emphasized the ACLU’s commitment to preserving abortion rights in California.

“No matter what the U.S. Supreme Court decides, we remain committed to the fight to protect and advance this broad vision of reproductive justice across our state and ensure that all Californians, and especially communities that have been excluded from power, have the resources to ensure self-determined reproductive decision-making and family formation,” Rogers said.

For the LGBTQ+ population, the final decision on Dobbs could have a major impact on their day-to-day lives and fundamental rights. To the Human Right Campaign, it seems to be of the utmost importance that allies and advocates make their voices heard.

Warbelow said, “What we need now is outrage, anger, and action for those among our community who are about to see the most destructive attack on our civil rights in a generation. We will fight back.”