Runners take to the runway at San Carlos Airport 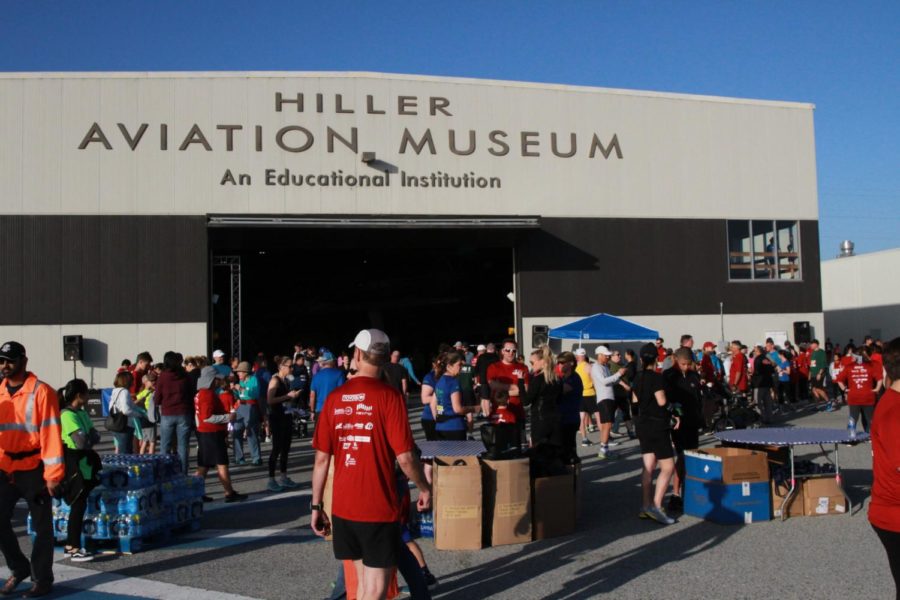 People gather around the Hiller Aviation Museum waiting for the race to take place.

Residents of all ages took over the runway, participating in 2K, 5K, and 10K races in the early morning hours.

The races were staggered, but all finished at the Hiller museum. Participants ranged from serious runners looking to improve their times to mothers pushing babies in strollers.

“I prepared for the race by walking from the car to the entrance. I’m a sprinter so I don’t run long distance, but I did pretty good overall,” said Alex Pogorzelski, a 5K participant.

Some competitive runners prepared by doing extra training on the side.

“I do a couple runs a week: a long trail run at Edgewood Park, some shorter tempo runs around my house, and sprints at a track,” said Andrew Ramroth, a Math and AVID teacher at Carlmont.

Almost 400 runners ran the popular 5K race and over 130 ran the challenging 10K. The times ranged from fastest being around 16 minutes and slowest being around 50 minutes for the 5K. People running or walking the 10K took longer.

“I ran the 5K. My wife ran the 10K and averaged 7:09 per mile. She finished second among the women. I ran with my six-year-old son, Nolan, while pushing my two-year-old, Riley, in a stroller so my time was pretty slow,” said Matthew Miskelly, a Math and AVID teacher at Carlmont.

“I have some friends who were very involved in the creation and production of the fundraising event, so I wanted to support their cause of raising money for the educational programs at the Hiller Aviation Museum.  I also ran because I just like running. It is a sport I have been training for lately and I wanted to test where I was at,” Ramroth said.

In the end, participants had a great time and gave back to the community.