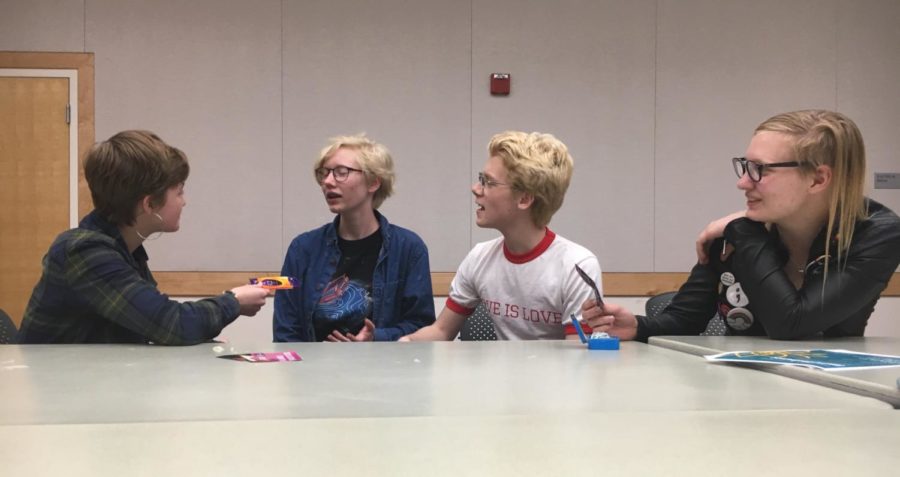 Teens stay at the library on April 27 after the Safe Sex Workshop to discuss what they learned.

Approximately 20 million new cases of STDs are found in the United States every year. Around half of these are found in young people between the ages of 15 and 24.

On Wednesday, April 27, the Belmont Library and the San Mateo County Pride Center hosted a Safe Sex Workshop for LGBT teens, which was taught by Planned Parenthood.

During the session, teens were informed about possible safety measures they could take, as well as what resources are available to them.

“This [workshop] is different from the Teen Talk at school because the needs in class are not always met,” said Caitlin Gallardo-Sebti, a health educator at Planned Parenthood. “This is beneficial to high school students because it provides a comfortable environment to ask questions.”

This workshop was designed to inform specifically LGBT teens about safer sex and as provide a safe environment to ask questions.

“I liked how they supplied everything and answered all the question we had,” said Cameron Garcia Brown, a junior and one of the teens that attended the workshop.

“Even though we have Teen Talk during our freshman year, people tend to forget the important things, and vaguely remember some of the less helpful topics,” said Aspen Woodward, a senior who attended the workshop.

According to Shea Rouland, a senior who attended the session, LGBT teens don’t get enough representation and are often treated as “others,” which is why an LGBT targeted workshop was beneficial to them.

“There is a lack of education for LGBT needs [in school sex-ed classes],” Woodward said. “If some things are mentioned, they don’t always get into it or apply it.”

There were additional aspects of the workshop that made it uniquely helpful.

“This class wasn’t super serious like a classroom environment at school,” Rouland said. “This felt like a more positive environment to ask questions.”

The workshop made its debut this year, and all the participants agreed to host and attend another one of these.

“This was the first time we’ve had one of these, but we would like to have more,” said Gallardo-Sebti. “In the future, we could also discuss and cover more topics that we could not cover this time.”