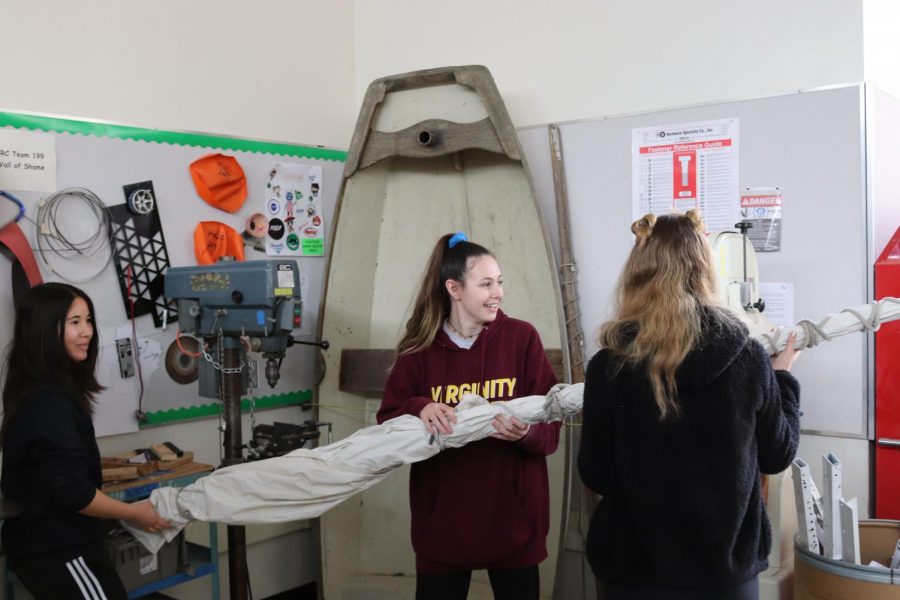 Members of Sailing Club work on improving teacher Alexander Wallace's old sail and boat, including the boom, the horizontal pole which extends from the bottom of the mast.

For a somewhat unknown activity, sailing has made its Carlmont debut through Sailing Club.

At the start of her junior year, Mia Yang scrolled through Carlmont’s club roster and noticed there wasn’t a club for those interested in sailing, a passion she pursued at her old school.

Wanting to change that, Yang approached her physics teacher Alexander Wallace, who is also interested in sailing, and asked him to be the adviser of her new club, Sailing Club.

But what’s a sailing club without a boat?

Luckily for Yang, Wallace had an old boat that he no longer had use for, so he donated it to the club. Everything pulled together, and it was now up to the team to make Carlmont’s first Sailing Club as successful as possible.

Given that sailing is a somewhat uncommon activity, members of the club, such as Vice President Ella Duarte, didn’t initially expect the club to attract new members.

“I was surprised that there were any other kids who sailed at Carlmont, and now there’s five of us, which is pretty impressive considering it’s the first year,” Duarte said.

Many joined the club with a shared appreciation for the unique skills that go hand-in-hand with sailing.

“It teaches people how to think for themselves by handling the boat. You have to be creative in the way that you do it. It’s a great way to be active but also really learn something about mechanics and how things operate,” Yang said.

During a typical weekly Wednesday meeting in B3, the club works on improving the Wallace’s old boat.

Being that the boat is from the ’60s, it needs many repairs. The club spends countless hours removing rust and rebuilding parts in hopes of being able to take it out on the water by spring.

“We haven’t gotten into too much of the sailing aspect; it’s more of the building stuff right now. Once we get it put all together, I think that we could probably take it out into the pool and practice tacking,” Wallace said.

However, finishing the boat isn’t the only goal of the club. They also hope to publicize more for people to recognize the club’s existence and even encourage those who have never sailed to join as well.

“It’s self-fulfilling to see everything come together and know you’re making something basically by scratch,” freshman Laura Byrne said.