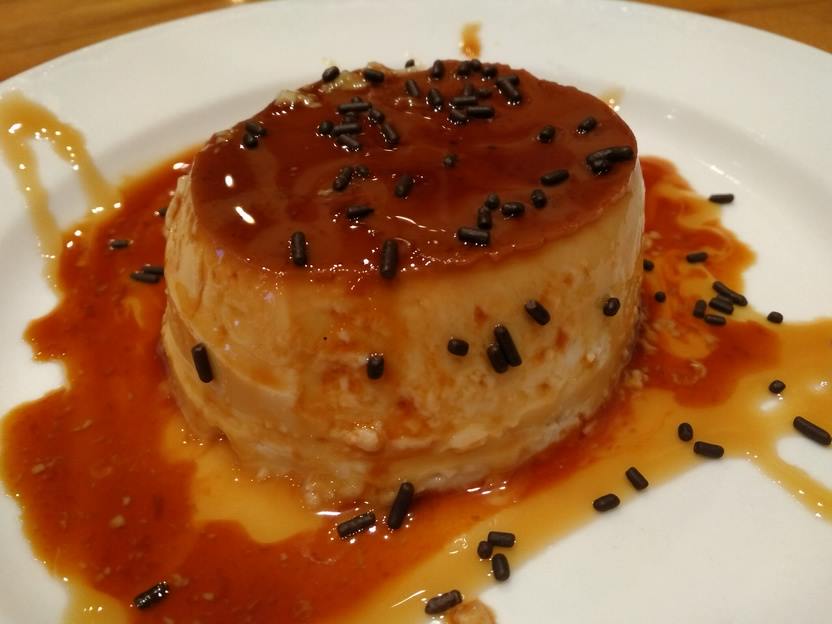 The caramel-covered flan is something to definitely consider after your meal.

While not a sports bar, the TVs showing Wednesday night basketball and the obvious assortment of alcohol makes it seem almost like one. While odd in this manner, The San Carlos Bar and Grill is spectacular in all others.

The restaurant, located on 648 El Camino Real, is one of the best seafood places I’ve been to. It may sound odd, but many of the meals available on the menu are seafood. Many of their platters include Chilean sea bass, shrimp, scallops, Scottish salmon, ahi tuna, and several others. There is also a free salsa bar and chips to help yourself too, which is very nice considering you typically don’t get to choose the salsa you want at restaurants.

As a starter I ordered the “Ahi Poke” — do yourself a favor and only order it if you love spicy foods, as in you put Sriracha on everything you eat. The plump crimson cubes of the ahi  were glazed with some sesame or soy pepper glaze  and made my tongue go up in flames. It tasted really good, but it took a good five minutes before I could get the spiciness out of my mouth. Despite the pain it brought, the flavor was too good to give up.

As an entree I ordered the “Fish of the Day” quesadilla. Wanting an interesting dinner, I ordered the “Orange Roughy,” which according to Wikipedia (I had no idea what it was before ordering it) is “a relatively large deep-sea fish belonging to the slimehead family…The flesh is firm with a mild flavour.” In the quesadilla its meat was soft and nearly melted in my mouth. It went perfectly with the melted, gooey cheese and firm, toasted tortilla, which cannot be said for most fish quesadillas. Definitely one of the best quesadillas I have had to date; Baja Fresh has nothing on this.

I also tried the Chilean sea bass steak which actually melted in my mouth — yes, it was that tender. It was almost like a seafood panna cotta, but drizzled with butter. The sea-bass’s meat was phenomenal, easy to cut, and cooked to perfection. I wish I could’ve preserved it in its prime when it was freshly served, but alas my hunger was far greater than my own self control.

The baked potato as a side was unlike any other I’ve encountered. It was “twice baked,” meaning (from what I understand) it was baked then its innards whipped into almost-mashed potatoes, and then baked again. That too was a star of its own. Even without toppings, the potato itself was worthy of its own plate. It was crisp on the outermost portions, but warm, soft, and fluffy as my fork ventured deeper and deeper into it.

The last thing I had was their dessert, flan. It was a little disappointing that they only had one kind of dessert, but it was good. It wasn’t outstanding like the other dishes, but still quote-on-quote good. There was an interesting difference between theirs and more traditional flan. Theirs had more of a runny caramel sauce covering it along with a strong caramel flavor, and to top it all off — a gracious spread of chocolate sprinkles.

Overall, the San Carlos Bar and Grill was a fantastic place to eat. Come for a quick bite or stay and watch the game for a while — whichever you prefer, it will work for you.