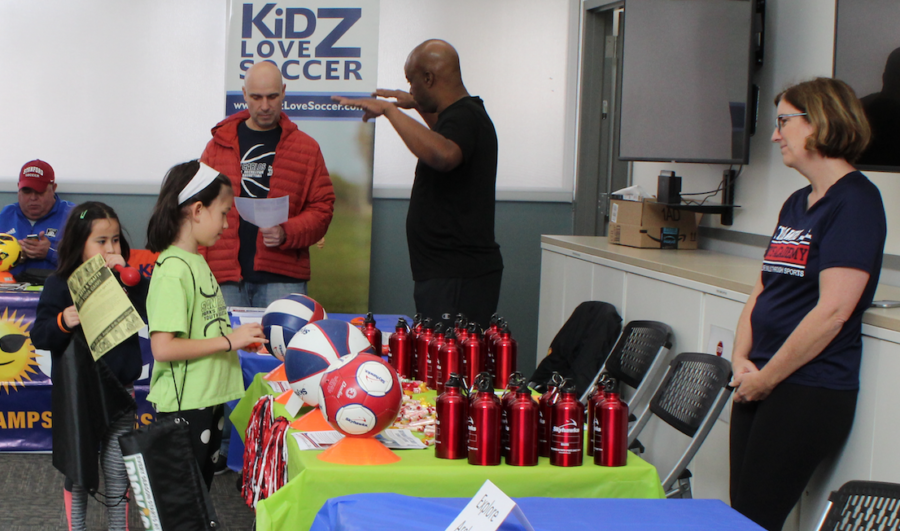 Families browse in the sports section of the San Carlos Camp Fair.

San Carlos held their second annual Camp Fair, a showcase for local summer programs. It was an opportunity for parents, children, and teens looking for summer jobs to talk directly to the camp directors and ask questions that could not be answered online or in a pamphlet.

The event was held inside the San Carlos Youth Center on Saturday, March 2. Activities such as face painting entertained young children while their family members shopped and signed up for camps.

“The fair was really helpful since we’re new to the area. It’s nice to learn about what all the options are,” said Heather Holliday, a San Carlos parent.

Many of the new camps offered this year are based on STEM.

“There are two cooking camps, which I’m really excited about because my older daughter likes to cook. We were also looking at sports camps. My younger daughter used to do karate, so I am excited to maybe get her into it,” Holliday said.

The city of San Carlos has a Leader In Training Education (LITE) Program in which teens from ages 13 to 16 can learn how to be a camp leader and work with younger children. One must be over the age of 16 to be eligible to become an official camp leader.

“You would have your own group of kids that you are responsible for, and it’s such a fun job. You get to work with people your age, play games, and do crafts, very traditional camp activities,” said Caitlyn Matoso, a recreation coordinator.

Some camps look for teens with specific expertise to be camp leaders.

“Our main focus is to teach youth life skills. We teach public speaking with confidence, debates, and personal finance. For counselors, it is required to be part of their speech and debate team at their high school,” said Ritu Khurana, the co-leader of Guru’s educational camps.

Neilson, who was invited to the event by the City of San Carlos, praised the event’s usefulness.

“It is a very good event because you can come and look at all the different camps that are available, and when my kids were younger, we’d love to come to things like this,” Neilson said.