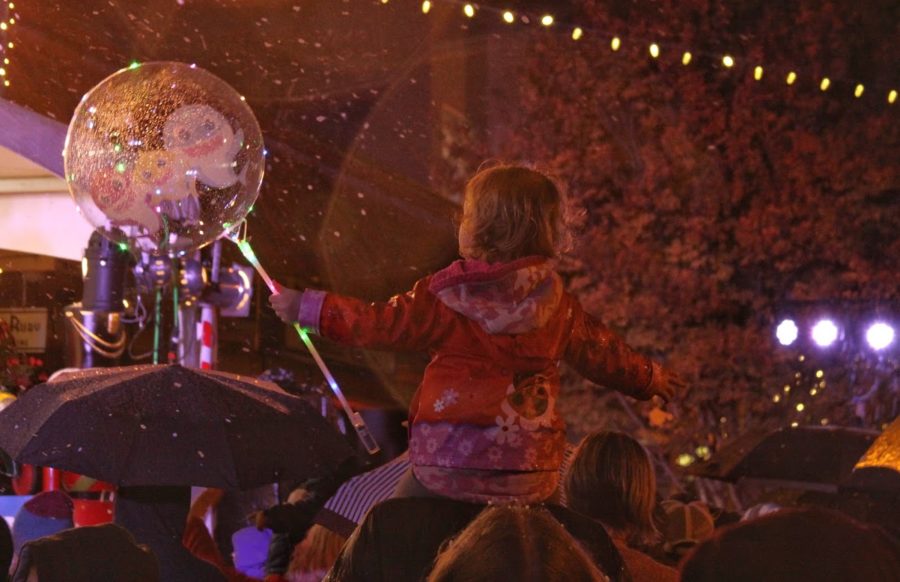 A stiff breeze wafted down Laurel Street, ushering in dark, rain-filled clouds. A sign advertising “Basic Beauty” was ripped from a pop-up tent and blew down the street. A group of boys played on the road, pretending their umbrellas were lightsabers. The first drops of rain began to fall around 5:30 p.m., and the San Carlos residents crowding the light-strung street pulled out their umbrellas and raincoats.

“Well, the party’s over,” a passerby joked. But San Carlos’s Night of Holiday Lights is far from over.

The annual holiday celebration was organized by San Carlos Parks and Recreation, who spent most of the day setting up for the event. Though weather forecasters had been predicting heavy rain all week, the celebration showed no sign of cancellation.

“Usually, we have a big area of real snow that comes in, but we had to cancel it this year just because of the rain,” said Amy Newby, the director of Parks and Recreation. However, all other plans, including a stage for entertainment, carnival rides, and vendors, continued as scheduled.

“We just hope that people come out and brave the rain,” Newby said.

“I went a lot during middle school and elementary school,” Carlmont senior Kyle Wilkinson said. “This is my second time here during high school.”

The Night of Holiday Lights featured several different forms of live entertainment. A four-person brass band roamed the street. A group of Dickensian carolers stood on corners and performed traditional Christmas carols. Later, a group of “elves” performed a show on a large raised stage, which involved knives and a towering unicycle. To the delight of all, Santa made a special appearance. Towards the end of the night, The Fabulous Cruise Tones took the stage for some live music.

As attendees entered the closed-off section of Laurel Street, they were greeted by a line of vibrant stalls. These booths were sold everything from candles to friendship bracelets to bath bombs. Members of the Sheriff’s Activities League (SAL) spent the Night of Holiday Lights creating their booths and selling their handmade products to San Carlos residents. This was part of a new program by the SAL to promote business skills to children in the community.

“I have three workshops for the kids,” Bayside Program Director Mary Martinez said. “We talk about their business plan, strategies, marketing, branding, customer service, presentation, etc. Then we do a one-day pop-up shop, which is at the Night of Holiday Lights.”

In addition to bringing the community together, the night also promoted local businesses. Shops and restaurants along Laurel Street stayed open late to serve patrons coming for the Night of Holiday Lights, and Santa himself encouraged the festivalgoers to shop local.

Dwell Realtors brought a galaxy far, far away to San Carlos. Star Wars stormtroopers, Darth Vader, and a member of General Snoke’s Praetorian Guard joined in on the festivities and posed for pictures outside the building.

“It’s fun that so many people can come down and get in the spirit while also supporting local businesses,” Wilkinson said.

Though San Carlos got more of a wet Christmas than a white Christmas, the Night of Holiday Lights got the town in the holiday spirit.