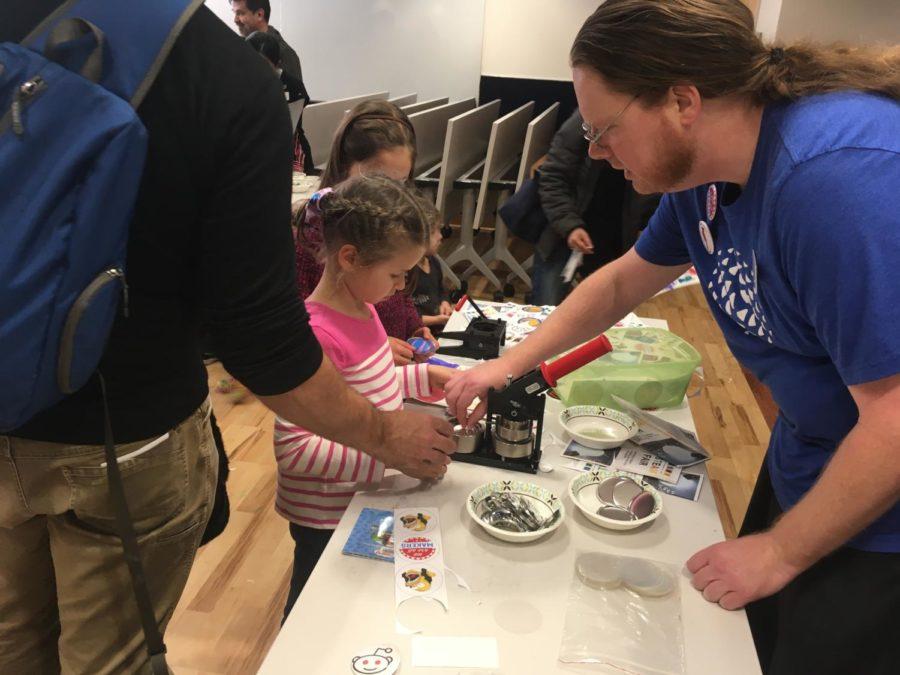 Kids learn how to make buttons at the San Carlos Library's ST.E.A.M. Fair.

On January 20, the San Carlos Library held its first-ever S.T.E.A.M. Fair to give the San Carlos community hands-on experience with science. S.T.E.A.M. is an acronym for science and technology interpreted through engineering and the arts, all based in mathematical elements.

The fair consisted of seven different activities and were spread out between the upper and lower levels of the library. The first floor held activities such as giant Jenga, 3D printing, and Rigamajig building. A Rigamajig is a building kit consisting of wooden planks, wheels, nuts, bolts, pulleys, and ropes, designed to teach kids to build three-dimensional structures and work collaboratively.

The second floor consisted of watercolor painting, button making, and a ukulele petting zoo. At this station, participants could try out one of many ukuleles offered by the library and become more familiar with the instrument.

The main attraction of the fair was the flight simulator sponsored by the Hiller Aviation Museum. In this simulation, participants attempted to land a plane successfully on a runway. They did so by steering the plane with a yoke (a plane’s steering wheel) and adjusting the speed of the plane with a throttle.

“Our goal was to show kids that learning isn’t scary and that it can actually be really fun,” said Bitian Zhang, the San Carlos Library’s community program specialist. The San Carlos Libary holds events like this about three to four times a year.

“We want to make sure all our patrons know the services we offer and are available to them,” said Zhang.

However, these were not the only objectives of the S.T.E.A.M. Fair.

“We wanted to help people make the transition from consumer to technologist,” said Gary Ransford, an assistant program developer at the San Carlos Library.

The library offers programs that allow people to become more familiar with technology and how it works and plans to host more events like this in the future.

“Our library is always looking for new suggestions for programs and utilities,” said Zhang.