San Carlos residents look for new ways to be inclusive 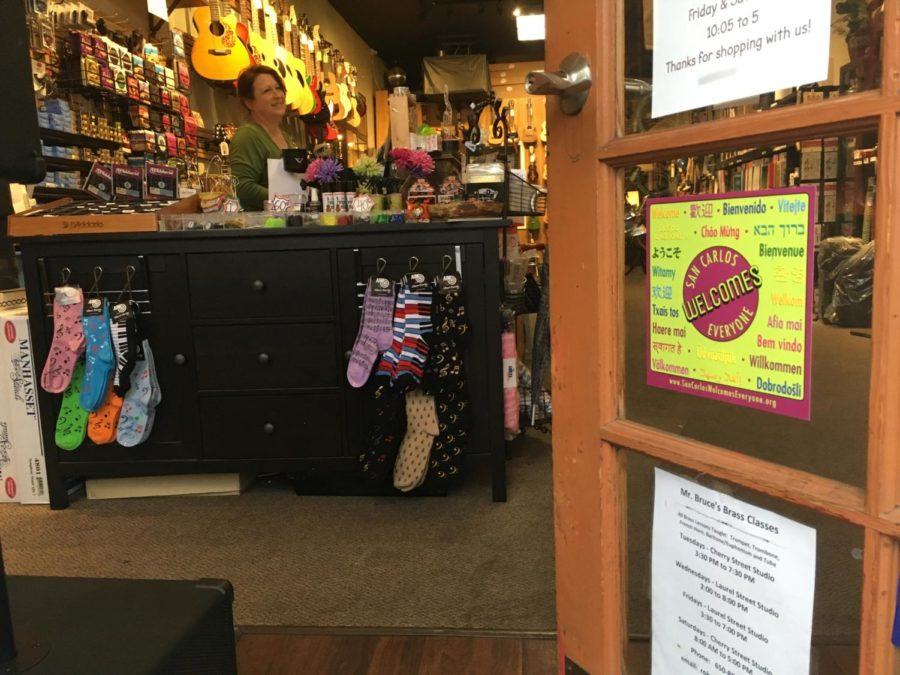 Susan Kimmel, owner of Clocktower Music, puts up a window cling sign welcoming all customers to her store.

The city of San Carlos is known as “The City of Good Living” and some are looking to make it even better.

On Nov. 4, teens from the San Carlos Youth Advisory Council walked around Laurel Street handing out window clings. These clings were produced by the San Carlos Welcomes Everyone project to promote inclusivity in the city and to build upon its reputation as “The City of Good Living.”

Sakina Bambot, a junior at Carlmont, helped distribute the window clings and run the initiative, which was created to make the city feel more communal. “It’s a simple way to make the city welcome,” said Bambot.

Bambot, Eve Garcia-Torbensen, a junior at Carlmont, and others helped to create the initiative and its activities with program-leader Christin Hinojosa-Kirschenbaum.

“Once we had heard of this initiative, we decided to be a part of it,” said Bambot.

The teens helped design the project’s web page and the plans for the signs.

“We met on various days to work on signs and discuss how to approach the stores,” said Bambot.

The city of San Carlos had done something similar by making welcoming signs for municipal buildings. However, these signs were not very eye catching or easy to see. “We wanted to improve upon their idea,” said Bambot.

They did just that as the new signs are not only more vibrant but they can also be displayed on privately owned businesses.

Susan Kimmel, owner of Clocktower Music on Laurel Street was one such store to put up a sign. “I believe in welcoming everyone,” said Kimmel. “I want people to know that everyone is welcome here.” Clocktower Music has been part of the San Carlos community since 1983.

“I would like to say to anyone that doesn’t already know, that San Carlos is a welcoming city,” said Kimmel.