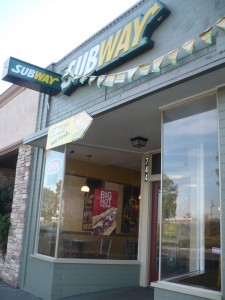 On Monday, Jan. 24, two suspects entered a local sandwich shop and robbed the store at gunpoint.

At approximately 7:50pm, two caucasian males entered a Subway restaurant at 744 El Camino Real in San Carlos, walked behind the counter, and confronted the employee working at the time.

One of the suspects simulated a handgun under his sweatshirt, who in turn, flashed the gun at the employee who was working alone at the time. The employee was ordered by the men to open the cash register. He stood by as he watched the two suspects gathering an unknown amount of money.

According to police, the two robbers ran out the front door of the restaurant and headed southbound on El Camino.

The San Mateo County sheriff’s officials stated that they are still waiting for a lead in the case.