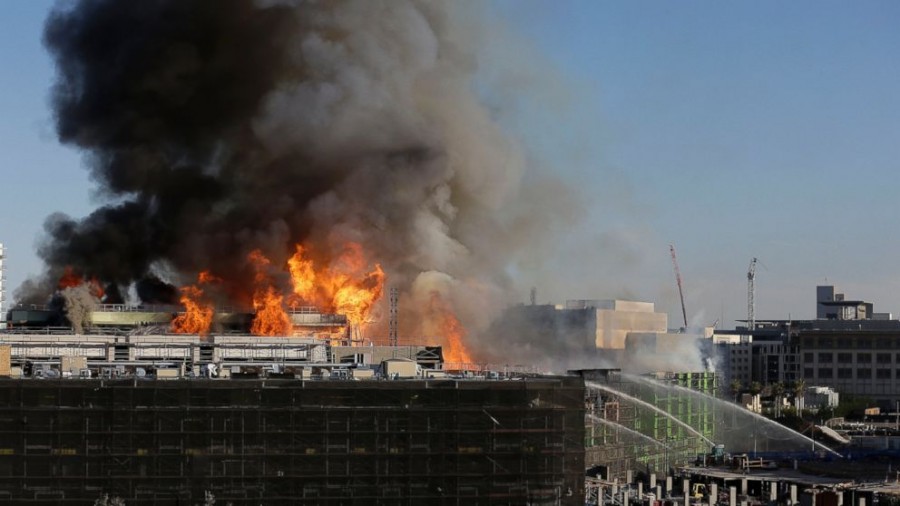 A five-alarm fire burnt down an apartment building construction site on Tuesday, sending up black smoke that could be seen for miles around the San Francisco Bay.

The fire began around 5 p.m. Tuesday in San Francisco’s Mission Bay neighborhood and caused an evacuation of nearby buildings. The fire also affected a nearby University of California at San Francisco (UCSF) research building, where an ember was quickly put out after spreading onto the roof.

The scorched building is part of an emerging Mission Bay neighborhood, just south of AT&T Park, where several developments are in the works as part of city revitalization efforts.

Several dozen residents were evacuated from the Strata apartment building across Fourth Street from the construction site, and about 25 were gathered late Tuesday at an American Red Cross evacuation center at Pier 54.

Hundreds of residents of homes in nearby buildings remained evacuated because the fire’s intense heat blew out windows, set off sprinkler systems, and caused other damage.

The burning building was part of a residential development project with 172 units, according to BRE Properties, the building’s owner. Fire-suppression systems had not yet been installed in the building, making it harder to extinguish the fire, fire officials said.

The fire was one of the biggest fires in San Francisco in years. The main cause of the inferno was said to be from welding work during the construction.

On Wednesday, demolition crews arrived to begin tearing down the burned building. About 30 firefighters remained on scene, dousing the building with water to make sure the fire was completely out.

Sophomore Brent Jang said, “The workers definitely need to be more careful. The fire could have spread to other resident buildings and injured more people, but the firefighters did a good job so that wouldn’t happen.”