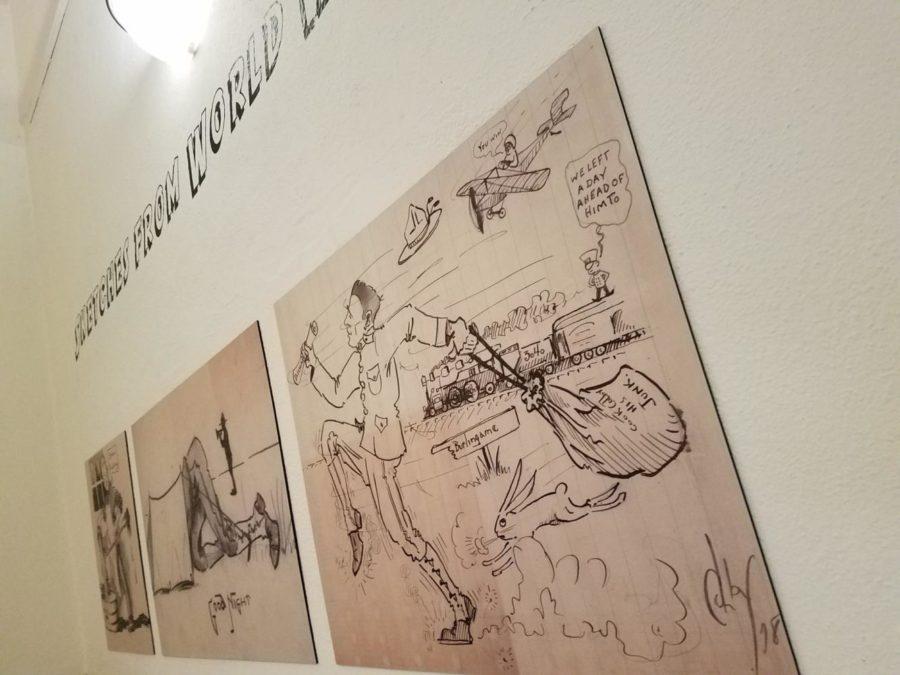 The exhibit showcases artwork from Alvin Page Colby, a soldier from Burlingame who later served as a cook while deployed in France. These scenes depict comic snippets from everyday life during World War I.

“[The sketches] give a whimsical side to something horrible. It’s autobiographical—a lot of these are self-portraits,” said Dana Neitzel, the curator of the museum.

This year marks the 99th anniversary of World War I, making the exhibit even more significant.

“A lot of times like this, [exhibits are] based on an anniversary [the museum] wants to honor, such as World War I,” Neitzel said. “Since World War I was also 100 years ago and we were already doing a World War II exhibit, we wanted to make sure we also paid homage to World War I.”

The museum continues to preserve local history through its exhibits. It has two floors, each with a different set of galleries showcasing the growth of suburban towns, local Native American culture, and notable figures from the county.

“There’s just something I think people need to feel rooted to a place. You can see your history and it makes it real,” said Alene Kremer, a local volunteer at the museum.

The museum also offers chances to witness history through different perspectives. In particular, it allows students to feel a more personal connection to subjects taught in school.

Sequoia High School sophomore Karina Bender said, “I think these types of exhibits are important because it’s a cool way to learn about history through the eyes of the people that went through it.”

In addition, the museum strives to teach both locals and tourists about San Mateo County’s rich history.

Neitzel said, “Our goal is to educate with our collection, not just to hide it away.”

Although the museum houses a multitude of exhibits, it sits empty for most of the day. The quietness of the museum provides a stark contrast to the artwork hanging on the rotunda walls.

The museum was founded by Roscoe Wyatt, the manager of the San Mateo County Chamber of Commerce in the 1930s, with the goal of attracting people to the county through its history. In 1999, the museum moved to its present location in the old county courthouse.

The sketches will remain on display through Jan. 14 to inform the public of San Mateo County’s role in World War I.

“I think any preservation of history is important because hopefully, we learn from the past,” said Kremer.