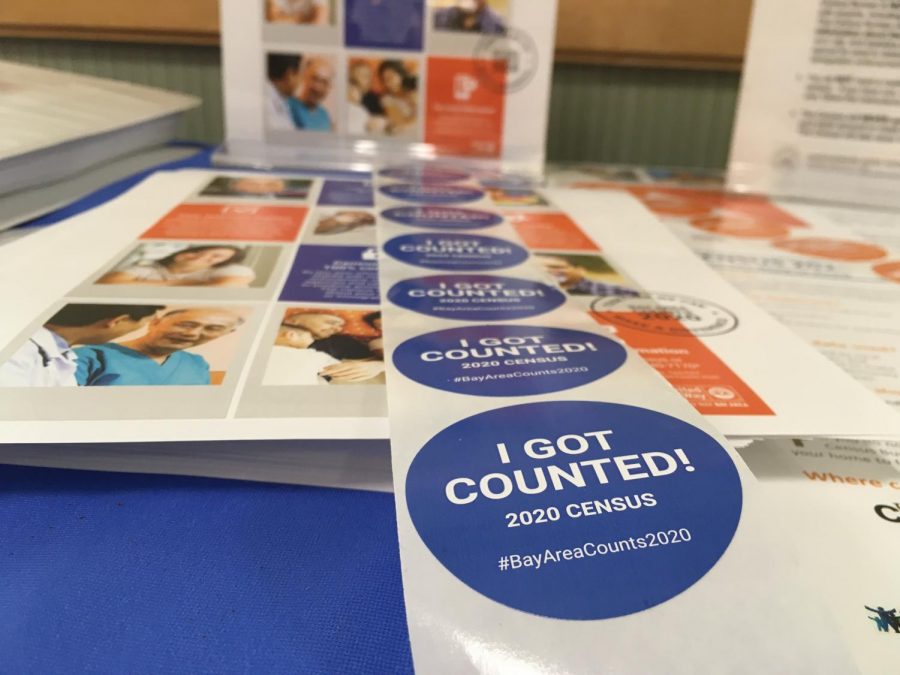 Rolls of stickers are ready to be taken by people who have filled out the census.

Large stands are lined with books, DVD’s, and magazines. The walls are covered in a variety of posters, ranging from advertisements for local shops to signs about book sales.

In a corner, an assortment of new and glossy bright orange posters about the U.S. Census fill the space.

That’s because it is 2020, the time to count every person in the country.

The U.S. Census Bureau gathers information on the national population every decade. Once every adult has submitted the online survey, the government decides on how to distribute a set amount of money to public programs throughout the country.

“It’s important to make sure that everyone gets counted, especially the young people in different households, and those who may feel a little bit uncomfortable completing the census,” said Theresa Saito, a San Carlos library outreach worker. “All San Mateo County libraries have trained some of their employees to assist anyone with the online census, so we are prepared to guide people through the process.”

The training took a few days, but the newly instituted community outreach workers have all the information they need regarding the census and what it entails.

“There was a short course that reminded us how to do the census and gave us general tips on how the community can best engage with it. This step was taken mostly to eliminate any misinformation about the process,” Saito said.

Many were eager to get started, and some of the librarians came up with creative approaches to teach the community about the census.

“I set up a ‘census storytime’ for the children and their parents so that they can learn more about the counting system. We will also be giving out books about this government program, and how it impacts our county and state,” said Michelle Ng, a Belmont library employee.

Other libraries in the area have set up tables with computers where people can fill out the census. Both the San Carlos and Redwood Shores libraries have desks covered in posters that explain how the survey works and what the benefits are. Each has a binder with translations in over 20 languages, to help those in the community who do not speak English well. However, these resources are not to last.

Starting March 16, San Mateo County is shutting down all libraries for two weeks, due to the coronavirus crisis that has recently hit the Bay Area.

“We will still be able to aid individuals remotely, as the census is 100% online. Since Census Day is coming up, it is our hope that the census itself will be extended to a later time,” Ng said.

Census Day is officially held on April 1 and will mark the time that the population should complete the census. Sometime in 2021, the government will release the general statistics of the poll, including demographics by state, to ensure that proper funding is given to each state, which is then distributed to various public programs in each county.

“The benefits of being counted is that especially for our younger users, we will be able to get proper funding for projects that are aimed at them and their families. It also helps us get a better idea of who is living here, and what services we need to provide,” Saito said.

According to Saito, the census will also give them a good idea about what financial resources they should provide for the growing number of millennials.

“From what I remember, the census is fairly quick and easy to fill out. In just a few minutes, you can make a positive difference in your community, simply by cataloging your existence,” said Catherine Buckman, a Carlmont parent. “Although it is a self-explanatory process, teaching the next generation how to fill it out is still important.”