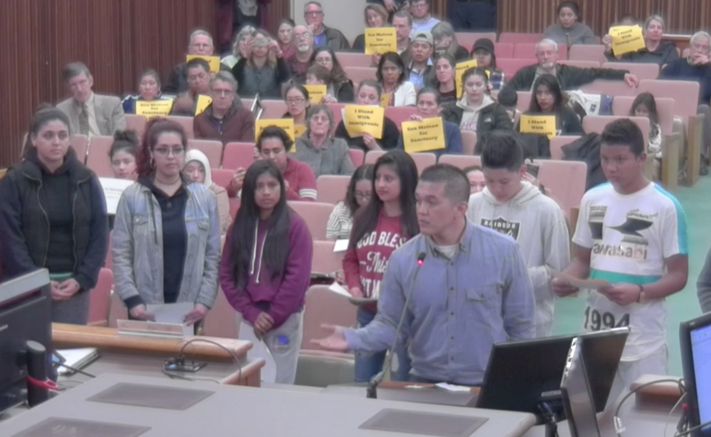 Recent efforts by the Trump administration to crack down on illegal immigration have prompted the City of San Mateo to re-evaluate its immigration practices and consider how local communities can counteract federal action against undocumented residents.

On March 6, the San Mateo City Council held a study session to consider issues pertaining to San Mateo’s immigrant communities and how the city government can support those affected by recent executive orders signed by President Donald Trump. During the session, the council received information and testimonies from law enforcement, activist organizations, and constituents on matters pertaining to immigration policy.

“This is a place for us to have discussions as a community and make decisions,” said San Mateo Mayor David Lim in his opening remarks. “This is a public forum and we want to hear from the community which is why we are talking about this issue.”

At the study session, constituents and council members discussed a resolution that would make San Mateo a sanctuary city. Sanctuary cities are jurisdictions where local law enforcement officials are able to harbor undocumented immigrants from federal officials. According to the Independent Journal Review, there are over 200 sanctuary cities in the United States with a high concentration in California.

Sanctuary cities have been criticized by the Trump administration, most notably through an executive order that was issued on Jan. 25 that threatened to cut federal funds to sanctuary cities. Both the Carlmont student body and the Bay Area as a whole remain polarized on the issue of adopting sanctuary city status.

Many constituents affected by recent federal action against undocumented immigrants delivered speeches to the council pleading for the protection of the immigrant community.

“I want to make sure that everybody knows that the threat is real,” said Edgardo Canda, a school counselor in San Mateo who was joined by a group of students whose parents face the threat of deportation. “[These children] are law abiding, they are good students, they are good people, and they contribute to this community.”

Alongside the calls for the protection of immigrants’ rights, other more conservative constituents voiced opposition towards a resolution that would make San Mateo a sanctuary city.

“There are plenty of worthy causes in this world. It is not the job of this body to solve them,” said San Mateo resident Thomas Weissmiller, a former agent for the Immigration and Customs Enforcement (ICE) deportation office. “There is enough for [this council] to do to maintain the infrastructure, safety, transportation, community services, housing, development, and sustainability of this city. This resolution will have no effect except to pander to special interest groups.”

The Carlmont community also remains divided on issues pertaining to the adoption of sanctuary status. Some students are concerned over the discrepancies that sanctuary cities present between local and federal law enforcement.

“Whether or not they agree or disagree with federal immigration laws, a city must respect the law and authority of the federal government,” said Victor Li, a senior.

Kelly Doherty, a sophomore, said, “I do think that funding should be cut from sanctuary cities who keep illegal immigrants from law enforcement because they are at odds with the laws of the United States.”

Deportation is a fear for all undocumented families. At any moment, the parents of a legal resident can be detained and deported by ICE officers. Despite the fact that sanctuary cities are in violation of national immigration laws, they are an efficient means by which to prevent deportations.

While President Trump has issued executive orders that aim to punish sanctuary cities, communities such as San Mateo have come together to show their solidarity with undocumented residents. Although ICE deportations are expected to increase under the Trump administration, the enforcement of restrictions on sanctuary cities remains unpredictable.

Although polarized viewpoints on immigration policy plague local politics, Carlmont students continue to show their support for the immigrant community.

“All citizens are equal, whether they have come to the United States recently, or they have been here for generations,” said Doherty.