Save the Music Festival brings the community together 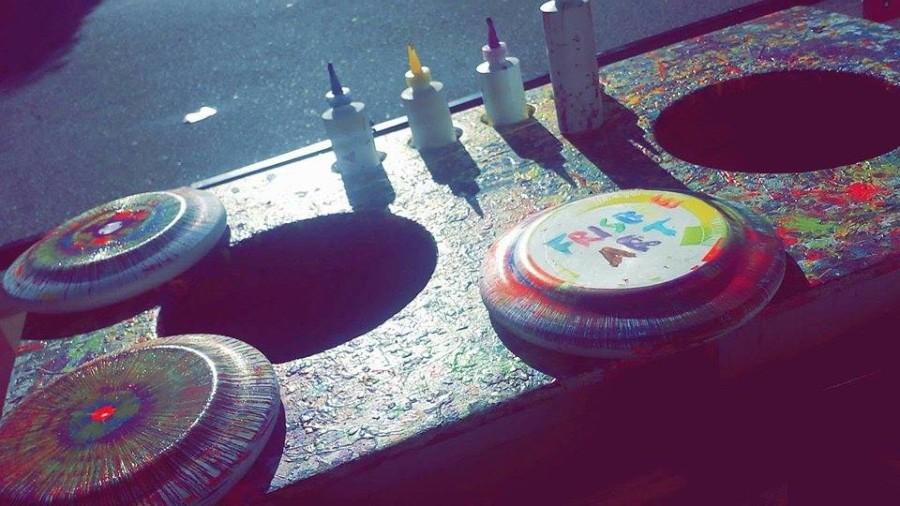 Carlmont trumpet player and vocalist Aria Frangos volunteered at the frisbee art booth for children and their families to enjoy.

Face-paint-covered children ran from one booth to the next. Community members of all ages volunteered in green t-shirts. Parents eagerly photographed their young musicians on stage. From 11 a.m. to 5 p.m. on Oct. 5, music of dozens of genres could be heard resonating off of the trees of Twin Pines park.

Save the Music marks the beginning of October for the Belmont community. Organized by School Force along with Alan and Emily Sarvar, the festival aims to raise money for the Belmont-Redwood Shores School District’s music program.

School Force was established in 2001 when the district faced serious budget short falls. The following year, funding for the fourth grade music program was cut.

“Save the Music brings the community together. [People] from all districts, at any age, come together to support the music program and cultivate an overall understanding of the music program,” said junior Sydney Pon.

Pon has been playing violin in the Belmont-Redwood Shores School District for eight years. As a passionate musician who has benefited from the district’s music program, Pon sees the value of providing music as part of public education’s curriculum.

“I really do believe that music is essential for education because its skill set crosses with every subject,” said Pon. “Music teaches resilience, discipline, continuity, and develops critical thinking which applies to anything you do. Music is a lifestyle.”

Carlmont music teacher John DaBaldo, who has taught in the district for over 15 years, has conducted groups in every Save the Music festival since the event first started 13 years ago.

“Cutting fourth grade music really impacted the whole music program. At the elementary level, waiting an extra year before they got to learn music meant we had less kids sign up overall. By the time they got to Ralston Middle School they had less musical experience and were further behind than they would have been if we had maintained the fourth grade music program,” said DaBaldo. “The parents had been really unhappy with the budget cuts and that’s when School Force began to talk about fundraising.”

That’s when the Save the Music festival came to the rescue.

According to DaBaldo, the Save the Music festival was a fundraiser “put together to raise money to supplement what was already spent on the program for elementary music.”

Even after fourth grade music was restored to the district, the negative impact on the program was noticed for a few more years.

“I remember for the next few years, music classes up at Ralston, where I was teaching at the time, had smaller numbers than usual. The kids who came into 6th grade were simply behind developmentally. Cutting fourth grade music made a huge difference,” said DaBaldo. “We’re very lucky to have it back now.”

The Music Mentoring program stepped in to help struggling elementary school students. Founded by the Sarvars, who no longer have children in the district, the program of pairing high school music students with a group of elementary students is still a vital part of the district’s music program today.

The profound impact of the Music Mentoring program is what motivates many high school music students to mentor. For senior Kevin Shu, it was what really connected him with his district’s music program.

“Music mentoring helped me immensely when I was first starting violin. Now I mentor at Sandpiper Elementary School and teach violin to fourth and fifth graders, and I know just how important it is for them to get a music education,” said Shu. “I wanted to continue the cycle and give back because I know I can help by just giving some of my time to the elementary school students.”

He has been playing violin in the district’s music program for nine years now, and has performed at Save the Music several times with his school’s orchestra.

“Save the Music is a great way to reach out to the public and convey that music is really important to a child’s development and character,” said Shu.

Although no longer faced with the same budget cut crisis of 13 years ago, the spirit of Save the Music is very much alive.

For example, Pon said, “When I was in elementary school, I heard that there were major budget cuts on school districts across the country. My parents set an example for me to volunteer and raise as money to keep music in our schools and continue instrumental music education.”

To this day, Pon is an avid volunteer in the community, remaining actively involved in making a positive impact in public education.

Whether motivated by their own experiences or their commitment to improving education in their district, dedication community members work hard to keep Save the Music up and running every year.