Saving lives 22 miles at a time 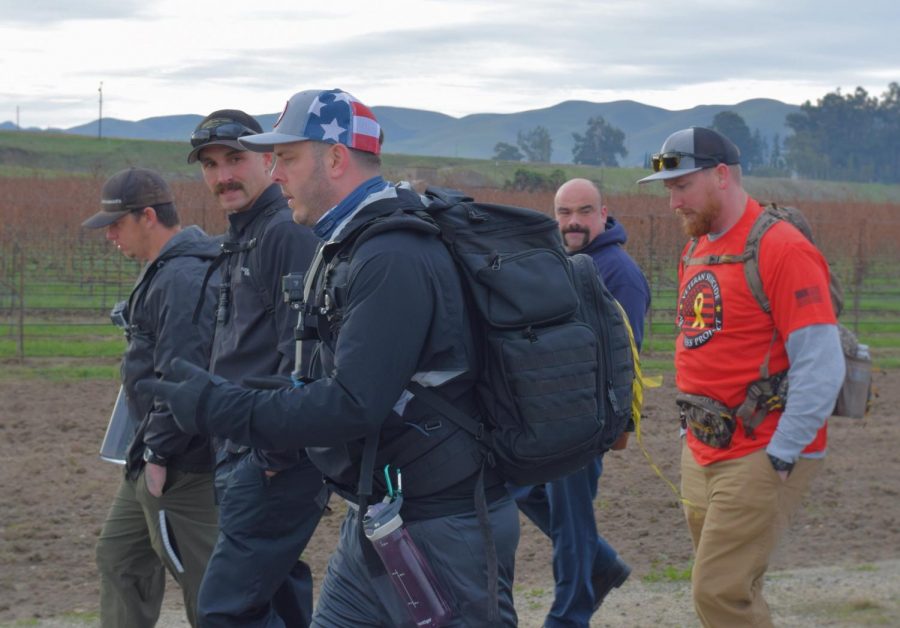 John Preston (center) hikes with a group of local firefighters a week in to his journey.

It’s 6 a.m. John Preston wakes up, slips hiking shoes onto his blistering feet, and carries his aching body to the starting point of the day.

Then, with the sun just barely peeking up into the sky, he walks.

He is walking for the 22 veterans who commit suicide every day. He walks not only for his brother, who took his life four years ago but for the millions of veterans who continue to struggle with mental health issues.

Preston, a United States Marine Corps veteran, and Palo Alto firefighter, is walking 22 miles a day while carrying a 22-kilogram backpack across coastal California. From Palo Alto to San Diego, he will cover 625 miles within a month.

“We just want to let people know that we, as a community, will not stop fighting for each other,” Preston said.

Preston’s brother was a police officer who lost his battle with depression and post-traumatic stress disorder (PTSD), a mental condition that Preston himself struggles with. Through this journey, he aims to inspire real change within the veteran community.

“Mental health awareness is starting to take ground in every community, but I want people to realize that we can do more than just be aware. We can take care of it and fight through this issue,” Preston said.

“I got a lot more creative on how we can make the world know that veteran mental health is a huge issue,” Preston said.

Preston’s powerful journey across California is being documented by Silver Rose Entertainment (SRE studios) through Veteran Powered Films, an organization that empowers first responders to tell their unique stories through film.

Silver Rose Entertainment was interested in capturing this extraordinary journey, due to the prevalence of the issue being discussed.

“I think we’ve all lost people to suicide. I’ve lost a couple myself, and it’s challenging to see all these veterans survive combat tours but then come home and take their own lives,” said Julia Ling, the founder of the organization and director of the film.

Ling hopes that through her company, the entertainment industry can shine a light on heroes’ lives after coming home and how they reintegrate into civilian society. She hopes this spotlight can expose common problems in the community, and point towards effective solutions.

The film, titled 22 and You, follows Preston throughout his entire journey with a mission of spreading his message to create a powerful impact in the veteran community.

“From our first short film, we had a huge outpouring of people internationally reaching out to us. Being able to do that now on a bigger scale to reach more people means the world to me,” Micah Haughey, the director of the film, said.

Preston’s vast support system continues to grow as his journey progresses. As he hikes, Preston’s production crew drives alongside him and supplies him with anything he needs throughout the day. Local firefighters, police officers, and other members of the community also meet up with him to walk and join the cause.

“The brotherhood has been amazing. Everywhere along the way, people come out to support the cause. Anytime we feel like we’re down on our hands and knees, and we’re tired and broken, a hand reaches out to pull us back up,” Ling said.

His supporters have become a crucial source of strength, motivating him to continue with the hike in the face of unbearable challenges. Despite six months of training, Preston struggles with the hike, even though he is only seven days into his journey.

No amount of training, however, could have prepared Preston for the intense emotional toll this journey has taken on him.

“Emotionally, the first few days were incredibly hard, especially for John. He wasn’t ready for the physical pain and emotional stress throughout the whole day,” William Condon said, the cinematographer of 22 and You.

However, Preston never loses sight of his goal to fight against veteran suicide and promote change within the community. This intensely personal cause serves as a constant reminder and drives him to persevere throughout this pain.

“I’m doing this not so much to honor my brother, but to honor everybody that gets left behind. I’m doing it to honor those that are still struggling and fighting and let them know that we put packs on our backs full of our problems, that my feet blister so that we can keep walking for them. That’s the whole goal, to keep taking those steps forward,” Preston said.