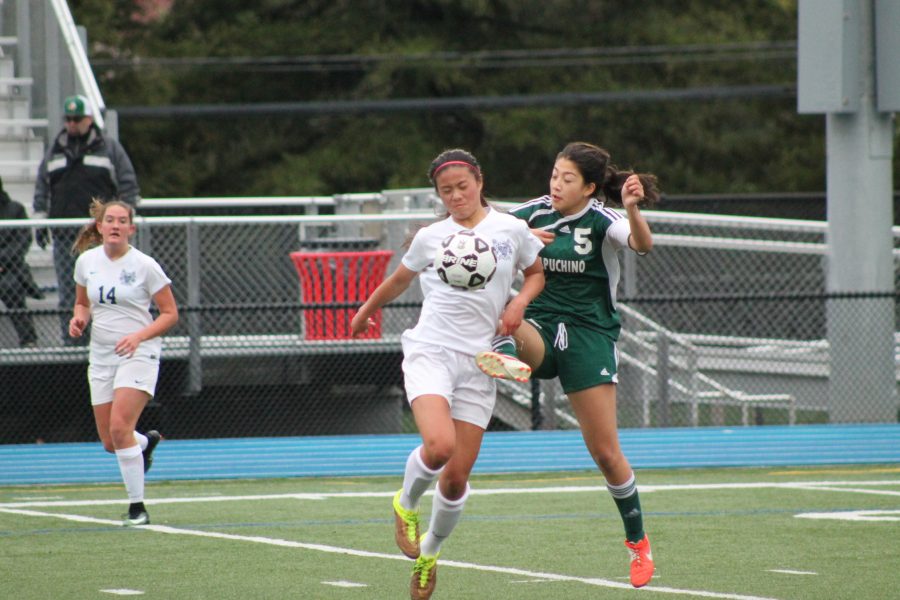 Freshman Samantha Phan pushes past a Capuchino defender on her way to the goal. Phan scored 2 goals during the game against Capuchino.

“We definitely improved from the start of the season by learning how to move together, get the ball up, and playing off of each other. This comes from learning how your teammates play and getting that gel going,” said assistant coach Jillian Quan.

The first half started with two goals from Carlmont in the first ten minutes. Sophomore Kayla Gustafson received a pass from freshman Samantha Phan and scored in the first minute of the game, establishing the high level of play Carlmont kept for the rest of the match.

“We scored first and early, and the momentum just kept coming. It felt so great to score because I consider myself a passing player so I normally set other players up to score,” said Gustafson.

Sophomore Samantha Tolu also scored early with a shot at the top of the goal within the first five minutes of the half.

Despite many attempts from Capuchino players, freshman Sarah Stulbarg defended the goal for Carlmont, letting no shots clear her during the first half.

The majority of the first half was played on Capuchino’s side with Carlmont taking the offensive position.

With three minutes left in the first half, freshman Samantha Phan swerved past defenders and scored after a deflection by Capuchino’s goalie.

Carlmont ended the first half ahead of Capuchino with a score of 3-0.

The second half started quickly with another goal from Samantha Phan, increasing the Scots lead to 4-0.

“[Scoring] felt really good because I haven’t gotten any goals all season, and getting two is even better,” said Phan.

The second half continued with attempts at goals by other Carlmont players such as freshman Kaija Villagrand and senior Paris Bartolo, but no shots got past Capuchino’s goalkeeper for the rest of the game.

Throughout the second half, Capuchino junior Amlaya Tomlinson made many runs towards Carlmont’s goal, but she was stopped by Carlmont defenders or by sophomore goalie Logan Bonetti.

The game ended as a win for Carlmont with the score 4-0.