Scots beat the Knights in a grueling battle 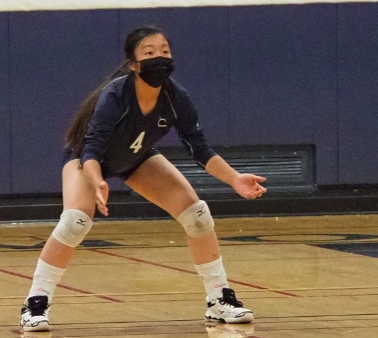 Petra Chow, a sophomore defensive specialist, prepares for a rally.

The Carlmont girls JV volleyball team crushed the Hillsdale Knights in a quick two-set match, despite a starting player getting injured in the first set. The emotion-filled game took place on Sept. 30 at Carlmont High School.

The Scots volleyball team previously placed second in the Spikefest Volleyball Tournament, but so far in their league, they were just under a 60% win percentage previous to their winning match. This, along with more recent team complications, left high tensions for the game.

In the first moments of the set, the bleacher-filled crowd became silent and time seemed to stop. Carlmont’s starting middle player, sophomore Evelyn Welton, was injured. As she was trying to block the opponent’s ball, Welton collided with another teammate and landed unstably, hurting her leg.

However, despite the rise in anxiety after hearing that Welton could not play for the rest of the game, her teammates stepped up and played on to win the first set 25-9. Michelle Spence, Carlmont’s JV girls volleyball head coach, managed the Scots well despite the shift in players.

“It was a little bit crazy because we had one girl pulled into playing varsity, and another got injured. So there were some people playing positions that they don’t normally play, but I think they worked really well together and did a good job,” Spence said.

The middle position is one of the most important spots in a volleyball team formation. It is physically demanding and key to blocking the opposing teams’ hits. However, sophomore Sophia Schreiber did not hesitate to take on the middle position after Welton was injured.

“She stepped up and played middle, and I think she did a really good job of that,” Spence said.

As the second set started, the Knights began to play even harder in hopes of catching up. However, players such as Kiana Young, a freshman outside hitter, and Isabelle Won, a sophomore libero, provided the Scots team with great spikes and defensive strokes, respectively, allowing their teammates to easily keep the match in their favor.

The second set ended with the Scots victory of 25-19. The teams would not continue to a third set. Recognizing the amount of hard work and persistence makes the win for the Scots even more satisfying.

“I thought that we had a lot of expectations in the first game, and there were some dull moments, but we still had a lot of fun,” said Petra Chow, a sophomore defensive specialist playing her first year for the Scots. “We like it when we prove that we are a good team.”

The Scots showed their great teamwork throughout the game, something especially impressive after losing a key player.

“I think we played really well, especially after Evelyn got hurt. We did a good job getting back into it,” Won said. “Even though a lot of teams would have just spiraled down, we did a good job staying with it.”