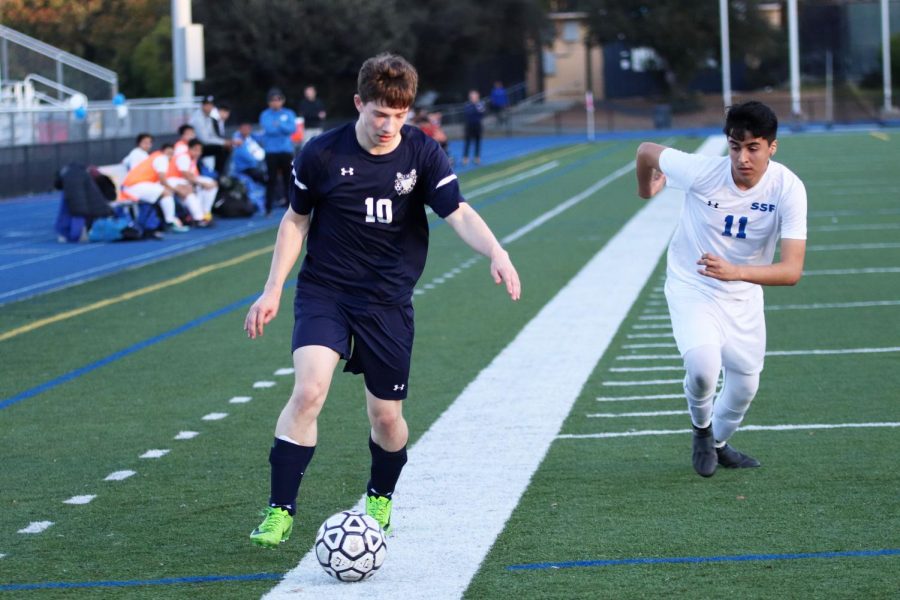 Dylan Roskind, a junior, dribbles the ball down the sideline and past a defender.

Before they took the field against South San Francisco, the Carlmont boys varsity soccer team had tied in four of their last six games, with their most recent match being a 2-0 loss to Aragon. With Central Coast Section (CCS) playoffs looming around the corner, they sat in second place in the Peninsula Athletic League (PAL) Bay Division standings, only behind Menlo-Atherton (M-A).

Led by senior Tomas Ronderos, who scored two goals, the Scots were able to come out with a decisive 4-0 victory against the Warriors, inching them closer to first in the standings as well as making the CCS playoffs.

From the start, the two teams fought back and forth, with each one continually applying pressure to the other. That all changed in the 25th minute when Carlmont senior Patrik Dufault-Geleziunas snuck a shot past the goalie to put the Scots up 1-0.

Soon after, Fletcher Smith, a junior, scored on a penalty kick in the 29th minute to put the Scots up 2-0. A few minutes later, Ronderos scored his first goal of the game, putting the Scots up 3-0 before halftime.

“Scoring those three goals gave us a lot of confidence to play harder and know that we’re better than the other team and that we can put away as many goals as we want,” Ronderos said.

The Warriors started the second half on the attack, but two consecutive offside penalties prevented their attacks from scoring.

When the Warriors returned on the offensive, the Scots defense stayed resilient, blocking multiple shots and stopping any advance.

“It’s disappointing, obviously. The team that scores is the team that wins, and we had the chances. We just couldn’t finish them,” said Alejandro Escamilla, head coach for South San Francisco.

The two teams continued to trade possessions as the game progressed, with each team getting shots off that weren’t able to find the net.

“I liked that we were able to move the ball around, which is what allowed us to create chances,” Escamilla said.

In the 67th minute, however, Ronderos received a pass from a teammate and found the back of the net as he scored his second and final goal of the match, putting Carlmont up 4-0.

“Ronderos, our center midfielder, was great. He impacted the game both with his creativity and his ability to finish his shots,” said Jose Caballero, head coach for Carlmont.

The Warriors’ last chance to score came in the closing minute of the game, when goalkeeper Varun Suklikar, a senior, went out to grab the ball and hit a South San Francisco player. The foul resulted in a penalty kick for the Warriors, setting them up in a great position to score. Suklikar saved the shot, though, and the Scots preserved their shutout, winning the game.

“I think when they see me make a big save, it motivates the team because it gives them another chance. It keeps us alive, and it gets everyone hyped and ready to score a goal, as well as momentum to keep pushing, and that’s how we get these shutout wins,” said Suklikar, who made multiple saves on the night.

The win solidifies the Scots second-place standing and their chance at making CCS, but M-A’s 3-0 win over Aragon keeps the Scots from taking sole possession of first place.

“The win means that we are in CCS and that we’ve separated ourselves further from this team in the standings. When you close out your season, you want to end it on a high note, and we also had a lot of players injured, and we’re starting to get them back,” Caballero said.

With only two games before the end of the season, the Scots hope to carry over the momentum from this win to finish out the season strong and make a push for first.

“We’re looking to get first place, and this gives us a boost because they’re a solid team. It gives us a lot of confidence for our next two games to try and make a push for first,” Ronderos said.