Scots crack the Acorns in the final innings 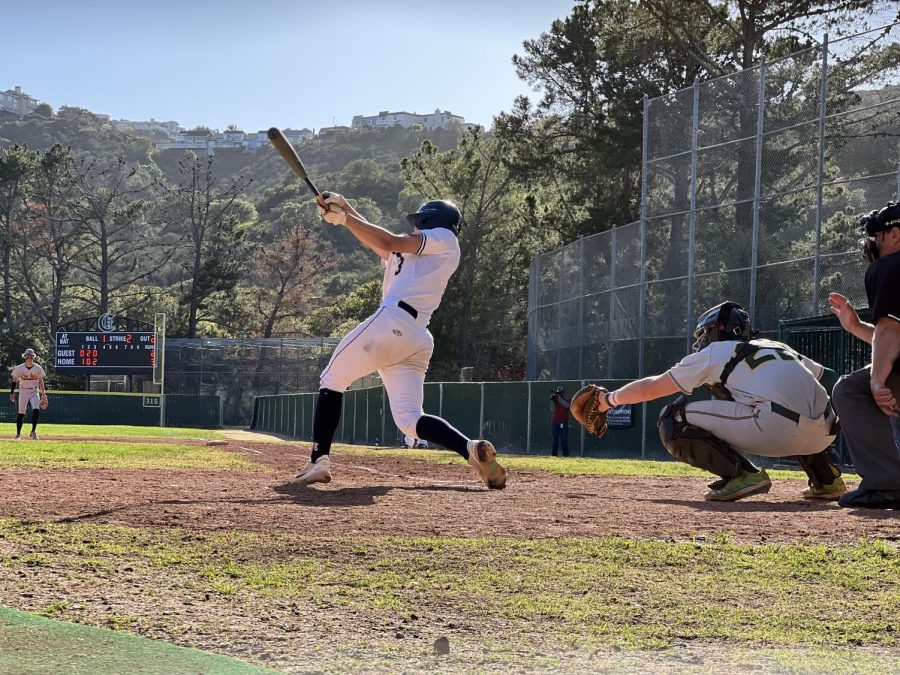 Senior Carson Vance swings at the ball as Carlmont leads 3-2 in the 3rd inning.

Carlmont’s varsity baseball team continues its hot streak as they rolled through Live Oak on Wednesday.

The Scots came back from a one-run deficit by scoring five unanswered runs in the 5th and 6th innings to win 8-4.

“It was key to shut them out in the fifth inning to carry that momentum and score runs to win the game. That was the turning point for us,” said Colton Fisher, a senior pitcher.

In the final two innings, RBI base hits from seniors Aidan Kurt, Tripp Garrish, and Carson Vance propelled Carlmont into a four-run lead, while the defense held a shutout through the final three innings.

“We came out with energy; we continually applied pressure on the offensive end and played excellent defense,” Garrish said.

Garrish began scoring with an RBI double and extended the lead at the end by hitting a single that scored two runs in the 6th inning. He then closed the game in a shutout pitching performance during the top of the 7th.

“Colton [Fisher] did a great job setting the tone on the mound by throwing strikes and competing,” Garrish said. “Our infield had a solid defense which wins games because we have hitters who can do the job; our key is to unlock that defense.”

Kurt, a senior infielder, also boasted a 3 RBI game which included scoring a runner on a triple to take the lead in the bottom of the 5th.

“We were getting many runners on base, which is good because we kept the pressure on them,” Kurt said. “The pitching did a great job getting us out without giving up too many runs.”

Carlmont’s record is currently 5-2-1 after their win against Live Oak. Previously, Carlmont has showcased their firepower and defensive efficiency in impressive games against other schools such as Serra and Los Altos.

“We’ve improved as non-league has gone on. Right now, we’re playing the best baseball of the season. There is room to improve, but overall I’m satisfied with how we’ve played so far,” said Ryan Hamilton, the head coach.

Against Serra, they dominated from start to finish, taking Serra’s top pitcher off the mound within two innings. Fisher also had a dominant performance and led the Scots to a 7-0 shutout.

“That game, I had a great performance on the mound,” Fisher said. “We all executed what we needed to do to win, and that’s what we need to do every game; just execute.”

Coach Hamilton was also ecstatic about the team’s performance.

“It was possibly the first game this program has ever had against Serra. We went through the records and couldn’t find another occasion, so beating them seven to nothing is a pretty big statement,” said Hamilton.

With momentum from the Live Oaks game, the Scots plan to bring their solid non-league form into their league games. They’re also playing at their best level while beating impressive opponents such as prestigious private schools. They’ve been able to build off of their pre-season and are more hopeful than ever in winning a title.

“Throughout non-league, we’ve been playing clean baseball, making the plays, getting good hits. I think we gotta keep that up,” said Kurt.

The team is suiting up tomorrow for a final non-league game at Menlo before facing Aragon. Their first league season game is Mar. 23.

“We have to continue coming in with hunger, ready to get better. We all have a fire, a want to win. All these guys buy-in, and they know what’s expected of them and how to act,” Garrish said. “We all come out each day with one goal: getting better, preparing for the next game, and winning.”