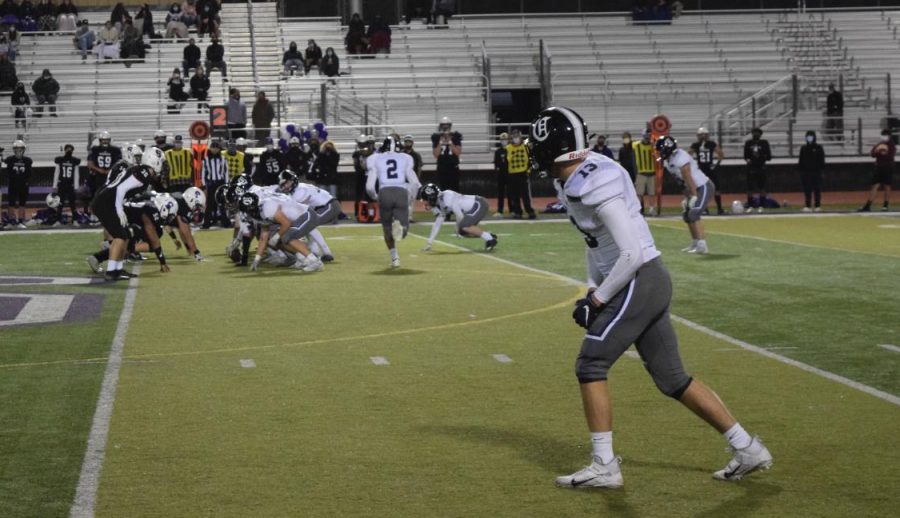 The Scots drive the ball up the field in an attempt to increase their lead entering the third quarter.

In their final game, the Carlmont Scots capped off an extraordinary season with a 34-14 victory over cross-town rivals, the Sequoia Ravens.

The game was bittersweet for many. Although it was the last game for the seniors, the team went undefeated, and for some, it was the game of their lives.

“It’s disappointing that it was our last game, but at the same time, we spent over a year lifting and preparing for the season regardless of how uncertain COVID-19 was,” said George Hanna, a senior on the team. “In the end, I was just excited and grateful that we were given the opportunity to demonstrate our hard work and ultimately go undefeated.”

On defense first, under first-year Carlmont defensive coordinator Brian Von Almen, the Scots forced Sequoia to punt after many tackles for losses and sacks.

With Carlmont’s offense taking the field, the Scots quickly gained momentum as running back Jaquari Hughes, a sophomore, unleashed for a 26-yard run that set up a 20-yard outside run to Hana for a touchdown.

The momentum continued immediately for the Scots; off of the ensuing kickoff, the Scots recovered a bobbled kick return on Sequoia’s 25-yard line. Then, with the same play as their first touchdown, Hanna forced his way through defenders and into the endzone for his second touchdown of the game. The easy pair of touchdowns gave Carlmont a 13-0 lead with just over five minutes left in the first quarter.

“I was extremely hyped after scoring the first two touchdowns both for me, my teammates, and the coaches because we came into the game ready to knock Sequoia off the ball, and it showed very early in the game,” Hanna said.

For much of the rest of the first quarter, the two teams were at a stalemate as both teams could not get significant gains and defenses continuously forced turnovers.

However, once the second quarter started, Ravens quarterback Damare Ward, a senior, and Sequoia’s offense quickly gained rhythm. Ward launched a pass to wide receiver Jack Kern, a junior, who ran 34 yards, setting up a 10-yard outside run to Daniel Martinez, a junior, for a touchdown.

A few plays later, Sequoia returner Nicholas Swee, a junior, displayed his rapid speed as he ran 57 yards past most of Carlmont’s players until he was finally brought down by Carlmont kicker Conner Cook, a sophomore.

In a great position to score, Ward, with outstanding arm talent, completed a 13-yard touchdown reception to wide receiver Jack Elgaaen, a sophomore. On the next play, instead of kicking a field goal, the Ravens, with no huddle, scored a two-point conversion with a run by Ward.

Entering halftime with what seemed like two one-sided quarters, the Ravens had a 14-13 lead.

“Despite letting Sequoia come back 13-0 to make it 14-13 at the half, we didn’t let that bring us down as a team. Our ability to bounce back from that was, in my opinion, something our team did well,” said Joshua Yglesias, a junior on the team.

Once the second half started, Carlmont returned with efficiency as Sean McKenna, a senior, scored on a 38-yard run to give the Scots the lead.

With their next offensive possession, Carlmont’s offense was short on third down and put in a fourth and one situation. However, instead of punting, the Scots broke their huddle and lined up in a triangle right formation. When the ball was snapped, Sequoia’s defense, although expecting a run, could not stop McKenna as he ran for 32 yards.

On the next play, a 20-yard reception was completed to McKenna, and on the next, McKenna scored with a counter sweep run often used in Carlmont’s offense.

Gambling once again, head coach Eric Rado called for a 2-point conversion which was scored with an inside run to Jake Bove, a senior.

A few possessions later, Sequoia’s offense began to drive down the field with momentum. However, while on the goal line, McKenna made a leaping grab to intercept the ball.

Although the Scots were unable to make anything out of it, the interception was another thing to add to McKenna’s excellent stat line. Entering the fourth quarter McKenna already ran 103 yards for two touchdowns and an interception.

With just under five minutes to go, Sequoia’s last hope for victory came on a huge 25-yard run; however, on fourth-and-27, Sequoia was short of a first down, and Carlmont’s offense took the field.

Carlmont would score again during the chew clock period with a 65-yard run by Bove, ultimately sealing the inevitable victory for the Scots. As the clock ran to zero, Carlmont players sprinted onto the field and performed a Gatorade dunk on Rado to celebrate a great team victory and undefeated 5-0 season.

“We were in complete joy when the game was over. All of our hard work since summer had finally paid off, and my brothers and I hoisted that trophy. It’s something that I will look back on with pride for the rest of my life,” McKenna said.

Overcoming adversity, Carlmont, under a completely new offense and coaching staff, went from placing sixth in their league the year before to winning it.

A significant part of Carlmont’s success was their head coach, Rado.

“I owe it to the players and my amazing coaching staff. This […] reflects the commitment our student-athletes have made to the program and team this past year. I am very proud to be their coach,” Rado said.

Despite their success, the Scots are unsatisfied. To them, the job isn’t done until they have won it all, and with the team being moved up a division, competition has increased. However, this does not change their narrative. Over the offseason and years to come, the team will continue to work hard as a brotherhood and as a family.