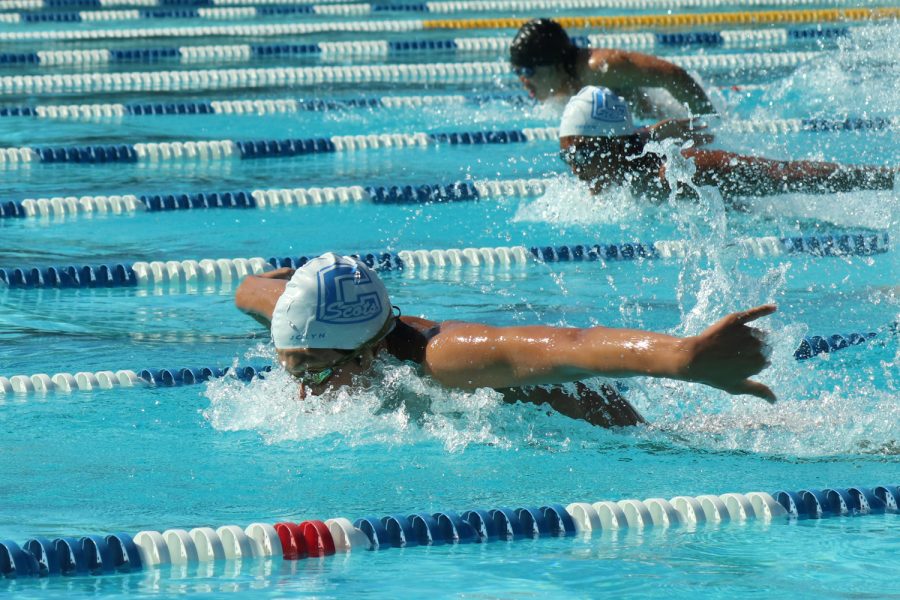 Billy Picht leads his race. "For PALs, the boys [are] still shooting for the win," Picht said. "It's going to be really tough."

The Scots triumphed over the Aragon Dons after an unexpected secure campus disrupted the teams and delayed the meet.

Billy Picht, a senior on boys varsity, noted that both teams were ushered into the locker rooms together, where they would remain until dismissed.

“All of a sudden, there were sirens. [There was] no time to dry off and no time to get your phone or anything. We just got in the locker rooms,” Picht said. “It was great because we got to know the other team. Now we’re best buds and having an excellent meet today.”

While the girls teams didn’t seem to unite under the secured campus in the same way the boys were.

“The girls in the locker room were kind of getting mad at each other,” said Sophia Chao, a junior on girls varsity. “Aragon was on one side, and Carlmont was on the other side of the locker room.”

Carlmont came out on top of the recent rivalry, with both girls varsity and girls JV victorious.

Although there was a unique companionship between the boys varsity teams, both entered the meet expecting a close fight.

“Right now, Aragon’s varsity boys are undefeated, so we have a big challenge. I don’t know how well we’re gonna do,” varsity swim coach Derek Koo said before the meet. “All I’m really looking for is that the swimmers put forward their best effort and aim for some best times.”

Although Aragon’s varsity boys came in strong, their JV team did not have the same fortune.

“For JV, we’re definitely losing because we only have six people,” said Olin Gawel, a JV swimmer for Aragon. “Overall, I think we’re doing pretty okay, though. Our goal was to get sub-two minutes in our relay, and we did so.”

Even though all of the athletes are fighting hard, competition in the league is exceptionally close for boys varsity.

“This is the first time in years for sure that the [Peninsula Athletic League (PAL)] division has had three strong teams, each vying for first place,” Picht said. “Usually, it’s just between us and M.A. But with the addition of Aragon, it’s going to be really exciting for sure.”

Despite the loss to Carlmont, Aragon is staying determined, working towards performing well in the finals.

“This season, we’re hoping to finish strong,” Gawel said. “PALs are coming up, and I think we’re gonna do pretty well.”

The meet was pivotal as it gave Carlmont boys varsity a much better chance at winning the league. Especially with close standings between the leading teams, both Carlmont and Aragon strive to improve as the PAL finals draw sooner.

“We had a lot of good swims [today] and a couple that kind of served as red flags [and] put the pressure on,” Koo said. “We have a week before finals, and I got a better idea of who needs to work on what and what we need to do as a team.”