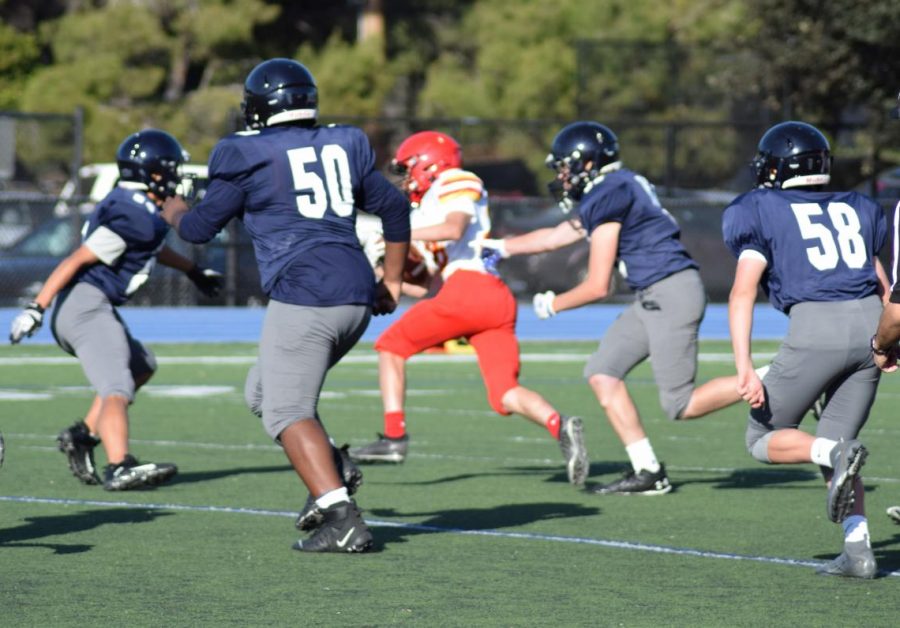 Scots’ defense hustles to tackle the Vikings’ running back.

In their last home game of the season, Carlmont’s JV football team defeated Mills. While this was the first game of the Vikings’ season, the opponent’s lack of season playing experience did not guarantee a win for the Scots.

“We just watched some of their 2019 film because they have the same coaching staff but prepared as best we can because we didn’t know what to expect,” said Leo Cappa, a sophomore running back.

Though the first quarter was unproductive for both teams, the Scots were able to close the quarter as the first team to put points on the board. Cappa sprinted out of the backfield, put an ankle-breaking move on the defense, and ran into the endzone for a 45-yard touchdown.

“Our run game is what works, and once we get our runs flowing, we can pass really well, and that’s how we set up our offense,” said Carlo Campobello, a freshman quarterback.

The second quarter also got off to a slow start. The Scots struggled to convert on several third down plays and turned the ball over with eight minutes left in the half.

Luckily, Dario Navarra, a sophomore defensive end, sacked the Vikings’ quarterback to give the Scots possession of the football. Mills forced another Carlmont turnover but ended up fumbling the ball away.

The Scots finished the half strong. Following an interception by Lefer, Alexander Sandin, a sophomore slotback, stiff-armed his defenders and ran the ball into the endzone for a 51-yard touchdown. This increased Carlmont’s lead to 22-0 as the teams went into halftime.

Using the momentum from the first half, Carlmont forced Mills to fumble the football. With a quick drive, Cappa was able to find an open lane created by Carlmont’s offensive line for a 3-yard touchdown.

“I trust [the offensive line], that’s my goal because, without them, I wouldn’t be able to do anything,” Cappa said.

For the rest of the third quarter, neither team could convert to a first down. The Vikings drove all the way down to the Scots’ 30-yard line but struggled yet again and ended up punting the ball away.

In the final quarter, Mills was hungry to score and capitalized on Carlmont’s turnover on downs. The Vikings finally got into the endzone, making the score 28-6, which ended up being the final score.

Braeden Kumer, a freshman running back, injured his knee with less than two minutes left in the game while trying to rush down the field. While saddened by the injury, the Scots were happy to come away victorious and dedicate the win to Kumer.

“With the late start to the season, I was able to get to know some players more individually, and I’m very confident with the core group that we have,” Nelson said.