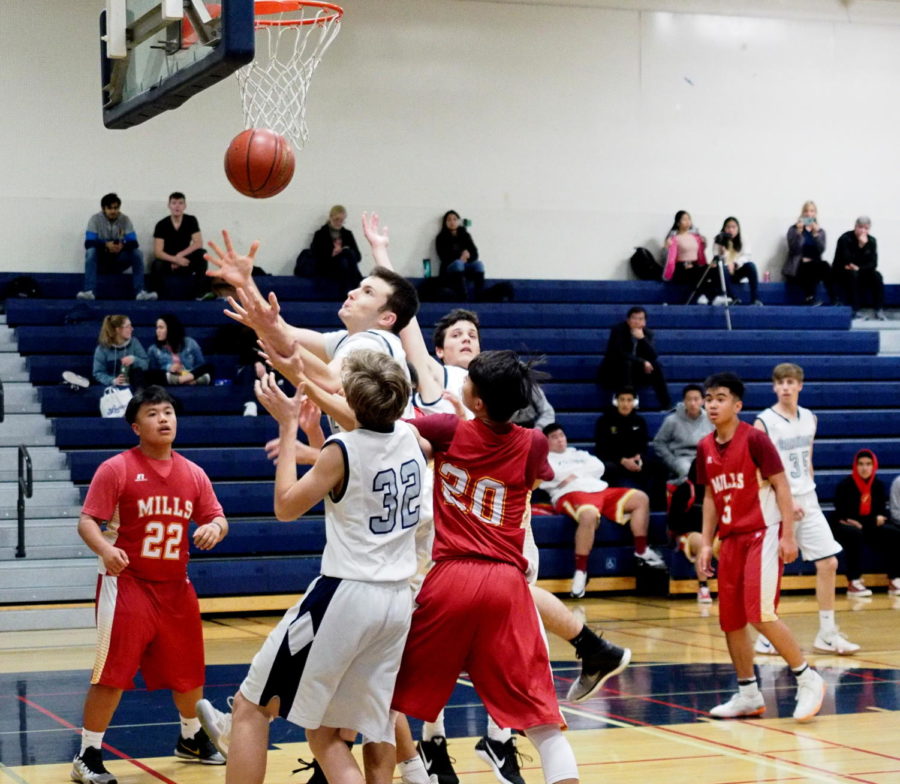 Will Hesselgren, a sophomore, picks up a foul by getting knocked while going for a layup.

In an average high school basketball game, each team fouls 11 times. Carlmont, however, fouled a season-high 23 times, while the Vikings used their zone defense to rattle the JV Scots. Mills High School’s Vikings remain undefeated after a physical 58-51 battle on Tuesday night.

When asked about the high foul count, the head official said, “It was a clean game even though it was physical, but what can you expect? It’s high school boys basketball; it’s bound to get physical.”

Shining in that light, Carlmont came out swinging with an aggressive man-to-man defense. The Scots forced three consecutive turnovers, giving them a 10-4 lead. Sophomores Miles Ozorio and Kyler DeBorde scored eight of the first 10 points. Mills quickly bounced back, scoring six-out-of-six points from the line, finishing the quarter 14-14. Both teams were already in foul trouble.

“They are a big team with a lot of talent and we had to play physical and aggressive for a chance against them,” Tummala said.

Alas, the second and third quarters were played mostly from the free throw line, which led to the Scots’ to start falling behind. In the third quarter, Scots were trailing 43-33.

“It was a battle of speed and endurance, and in the third [quarter] we got tired and made a couple sloppy passes, but what really hurt us were the free throws,” said guard Matthew Rutter, a sophomore.

Carlmont started out the fourth quarter strong, going on a 9-3 run, but, with sophomore power forward Donnie Livingston out with a wrist injury, and shooting guard Ozorio fouling out, they were down two starters and were a completely different team. The Vikings took full advantage.

A Mills jumper about a minute into the fourth gave them a seven-point lead. Carlmont followed with back-to-back three-point shots from Jon Su, a sophomore. After five consecutive scoreless possessions, DeBorde’s 3-pointer narrowed the deficit to 51-48, but Mills’ Matt Maravillas, a sophomore, countered with a breakaway layup that made it a 5-point game. The Scots fouled four more times giving a Mills player five late free throw points.

Mills’ starting forward, Maravillas said, “I think it was our team chemistry and free throw shots that really gave us the edge tonight.”

Mills held Carlmont to intense shooting in the fourth quarter and forced six fouls while earning their second victory against the Scots this season. Millbrae’s zone defense routinely had Carlmont settling for 3-pointers, and Mills’ aggressive offense ran circles around them.

Daniel Awad, a sophomore, made a final 3-point shot before Mills ran down the clock and scored one more layup to conclude their 58-51 victory.

The Scots looked nothing like the group that blew Woodside High out of the water two weeks earlier, with a season-high 18 point win.

Livingston’s injury started them off with a setback, but the night truly took an ominous turn for Carlmont when Ozorio fouled out.

Su said, “Donnie’s injury has definitely hurt our team, but I think we did a good job of stepping up and being ready to do a little extra to try and make up for missing our big man, but we will need to figure out our foul issue quickly because it was clearly a problem.”

With Carlmont’s game this Friday against rival Sequoia, the Scots hope to jump back to the three seed while the Vikings aim to stay undefeated.