Varsity Scots fall to Vikings in first matchup since 2006 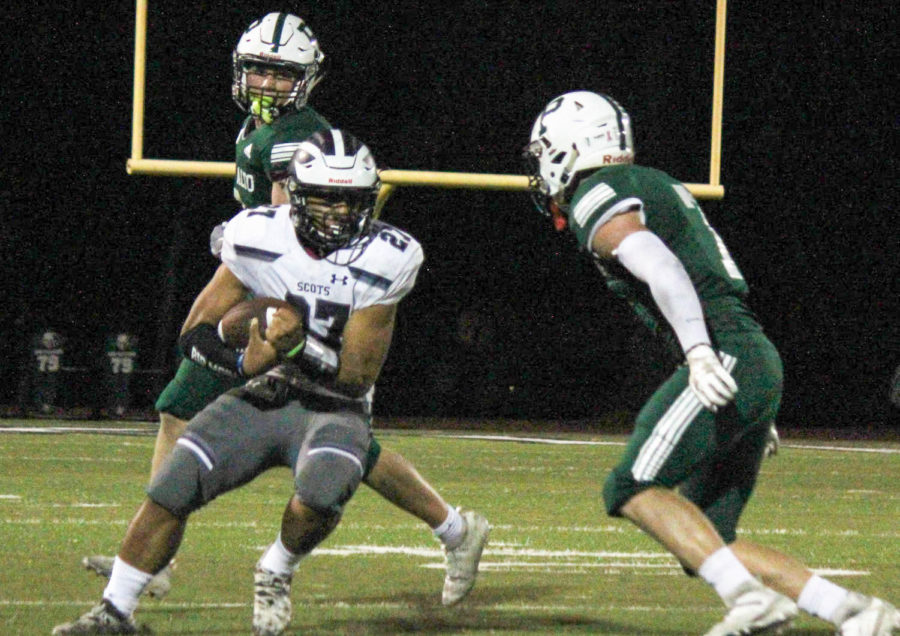 Dane Fifita, a sophomore, makes a move on a Viking defender.

Both teams entered the game on Sept. 21 with a two-game winning streak. The Vikings extended their streak to three on Friday with two passing touchdowns from quarterback Danny Peters and a big ground day from running back Josh Butler, whose rushing touchdown came from 58 yards out.

The Scots hoped to get started early, but a punt set up a Vikings drive capped off with a 38-yard touchdown catch by Palo Alto’s Colin Giffen.

On the ensuing drive, the Scots were stopped again, this time turning the ball over on downs.

The Vikings quickly capitalized, with Butler taking the ball 32 yards down to the Scots’ 5-yard line. From there, Max Giovannotto punched in a touchdown, putting the Vikings up 14-0.

After yet another punt, the Scots finally seemed to have something going after recovering a fumble inside Palo Alto territory.

Quickly moving down the field, Carlmont scored their first points at the start of the second quarter, thanks to a run by Fifita. The touchdown now had the score at 14-7. However, Carlmont running back Jonaven Kuhn was injured and was not able to return to the game.

Despite the injury, Carlmont looked to carry their momentum, but penalties took them outside the red zone and Palo Alto’s defense forced a turnover on downs.

“When Kuhn got hurt, it changed the configuration of our backfield and that was difficult to adjust to,” said Carlmont’s head coach, Jake Messina.

The Scots’ failure to score continued to work against them, as the Vikings marched down the field and scored on a pass by Peters that put them up 21-7.

Trying to score more points before halftime, the Scots ran the ball downfield. However, good defense by the Vikings forced Carlmont to settle for a field goal, and the Scots went into the half down 21-10.

“We prepared well for the game; our zones went well and we focused a lot on the run game,” Butler said.

Following a 58-yard touchdown by Butler to open up the half, the Scots refused to give up and began heating up. Scoring touchdowns on their next two drives, Carlmont was able to close the gap to 27-24 by the end of the third quarter.

“We learn from our mistakes and push harder. This was a tough team and we got to be disciplined and next week we are going to come out with more energy and fight harder,” Fifita said.

Despite the Scots carrying all the momentum, the Vikings drove down the field again and scored. This would be the last score of the game, with Palo Alto winning 34-24.

“Momentum is everything in football, its a game of inches. If you keep up picking up those yards, it builds up and whoever gets the momentum by the end of the game usually wins it,” Butler said.

Despite seeming like just an ordinary win, the Vikings’ victory was more than that. Both teams had made a lot of progressions since they last played 13 years ago, and the Vikings just barely were able to come on top of this one.

“At Palo Alto, we try to put athletes in a position to succeed and work to their strengths and trust in the process, and they’ve done that. On Carlmont’s end, I think that Jake Messina has transformed that program into what I think is just going to be a power,” said Palo Alto’s head coach, Nelson Gifford.

While Carlmont was on the wrong end of history yet again, their closure in the scoring gap shows obvious improvement.

“We played two of the top 15 teams during the offseason, and I’d rather do that than play bad teams because it continues to teach us. When you schedule like that you do it to challenge your team because what’s playing bad teams going to do?” Messina said.

What makes this game even more interesting is that the majority of the players may not have even been five years old when these two teams last faced, showing how much the game has changed since then.