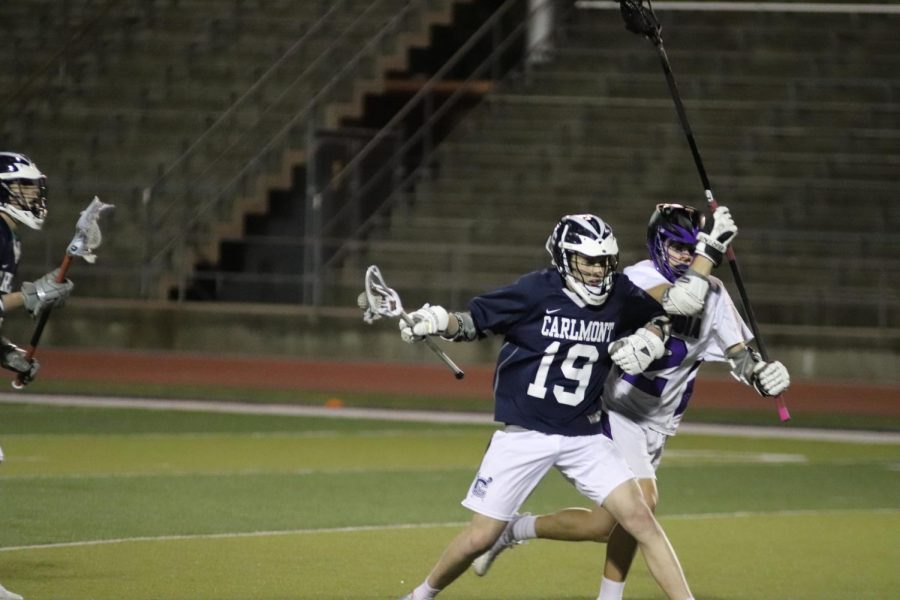 Charles Tocatlian, a sophomore, sees a gap in the defense and blows by his defender.

The Carlmont JV lacrosse team held off Sequoia 9-7 after the Ravens attempted to pull off a late comeback.

The Scots came out of the gates hot, which propelled them to victory, even after Sequoia came knocking on the door in the second half when they outscored the Scots 5-2.

“Our coach emphasized that we start the game with a lot of energy and show Sequoia that we came to play,” said freshman Sebastian Avants Hagan, a defender.

Early into the first quarter, sophomore Ethan Matsuda, an attacker, tallied the first points of the game. Shortly after, sophomore Charles Tocatlian added to the lead. The Ravens were able to bounce back and find the net, but not before the attacking duo of Tocatlian and Matsuda ran away with the show. Matsuda ended the game with five goals, and Tocatlian ended with four.

“I think the team played really well in the first half. We executed our plays well and also scored multiple times off of fast breaks. We got really complacent in the second half and let them back into the game,” Matsuda said.

The Ravens were able to capitalize and claw back into the game with newfound life in the second half. Their late surge was held in check by multiple great saves from freshman Matthew Salud, the goalkeeper, and two goals, one each from Matsuda and Tocatlian.

“[Matsuda] and [Tocatlian] have really provided a lot of leadership for our team, especially since some of us are relatively new to the sport. They give us most of our offense and always put us in position to win the game,” said sophomore Alec Perkins, a midfielder.

Both attackers were able to penetrate the middle of the Ravens’ defense and create scoring opportunities for each other.

“[Matsuda] and I were on the same page today, and it definitely showed on the field,” Tocatlian said.

The pair of attackers will look to continue their success and help their team to victory throughout the rest of the season.

The Scots will be back on the field on March 12 at 5:30 p.m. at home against Latino College Prep.