Scots finish off season with a ‘W’ 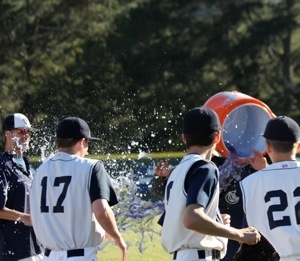 The frosh-soph baseball team finished off the season with an amazing game Friday afternoon.

Sweeping the Terra Nova Tigers in their last two games of the season, the final score of Friday’s game was 6-0 Scots.

“Wow. It was a great season,” said head coach Chris Davidson after the game.

And a great season it was. The Scots went 20-6 and placed second overall.

During Friday’s game, the Scots bats were consistently on fire. They played together as a team, just as they have all season. They scored five of their six runs in the bottom of the first inning and kept the Tigers scoreless for the whole game.

Sophomore Joe Pratt pitched all seven innings, something he’d like to do often but doesn’t always have the chance to. “It was the last game of the season, so I was trying to give everything I had,” said Pratt.

Pratt’s pitching was only a part of what allowed the team to achieve a win in their final game.

Assistant coach Keith Juracich stated, “getting a ‘w’ today, for me personally was the biggest moment of our season.”

Juracich added, “Anytime you have a 26 game schedule and you win 20 games, I mean that’s something to put a star by and remember that season.”

Sophomore Alex Smith said that this season was “good because all of our hard work went into 20 wins, so I feel that it was a complete success.”

This team had an amazing season. However, there will be an entirely different team next season.

With the sophomores moving up to varsity, Davidson hopes that “the freshmen will go work out and play baseball over the summer and come back stronger,” and also to “improve in every aspect, just stay in the swing of baseball.”

Smith said, “We’re going to do the same thing next year, just win.”

“The team did it,” Davidson said. “They’re a special group of kids, and this week, sweeping Terra Nova, was the highlight of this season.”

Another great season has come and gone for Carlmont’s frosh-soph team. Next year is bound to be a good one too.