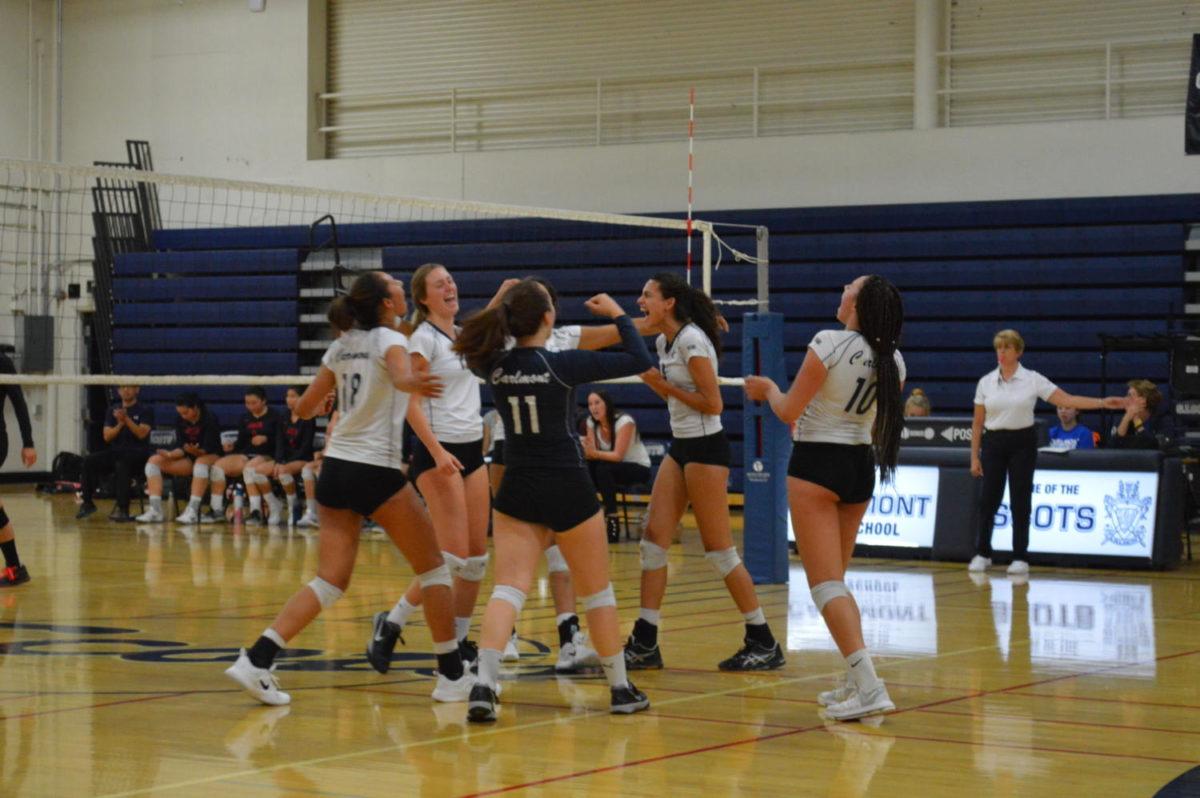 The Lady Scots celebrate their victory over the Aragon Dons.

Here comes the pass, the set, and kill for the Scots. Finally, the Scots take the victory over the Aragon Dons in the fifth set 15-10.

The beginning of this battle began with a series of tips at the net giving Aragon an early lead and causing the Scots to take a timeout in the first set.

After this timeout, the Scots came back thanks to three routine kills by the team’s resident outside hitter, Maya McClellan, a senior, who was assisted by setter Sophie Srivastava, a senior.

Despite this early momentum, the Dons quickly matched the energy on the other side of the net. A strategic tip by the team’s setter turned it around for the Dons resulting in roaring cheers from the bleachers.

Although the Scots were able to catch up to the Dons bringing the score to 22-19, they failed to score points from long rallies across the net and barely lost the set 25-23.

“I think we were missing our fire and intensity in the first set,” Emma Vanoncini, a senior, said.

Continuous kills from McClellan gave the Scots a much-needed boost in the second set against aggressive plays by the Dons.

In addition, a serving run by Srivastava put the Scots well ahead of their competitors at 17-13. The set ended in a victory for Carlmont with a double block by Srivastava and sophomore Catherine Dahlberg.

“We were able to pick it up in this set and get right back into the groove,” Dahlberg said.

The energy was high on both sides of the court during the third set. Both teams set up picture-perfect plays causing the score to be neck and neck.

However, the Scots inability to synchronize out-of-system plays cost them points allowing the Dons to tie to the set at 21-21. Following this was a close call at the line on Aragon’s side of the court, giving them serving possession and the momentum they needed to finish the set at 26-24.

“They [Aragon] were able to keep their energy up along with really great passing,” Elizabeth Prozell, a junior, said, “We lacked confidence and we didn’t believe in ourselves as much.”

Tensions rose in the fourth set as the Dons hoped to finish the match and the Scots hoped to keep fighting. The Scots scored the first four points, but Aragon soon caught up due to strategic tipping that the Scots were unable to return.

Incredible playing on both sides was depicted in an extensive rally towards the end of the set; Carlmont ultimately took the point with another kill by McClellan. The Scots won this set 25-19.

Energy reached high highs and low lows in the final set. Epic plays on both sides resulted in thundering cheers from both benches, but trivial mistakes began to put significant pressure on the players.

Kills from sophomore Alisha Mitha and McClellan caused the Dons to unravel. Net violations and the missing of simple passes cost them the game as the Scots won 15-10.

“We started off slow but were able to pick up our energy and really come together as a team to win,” Dahlberg said.