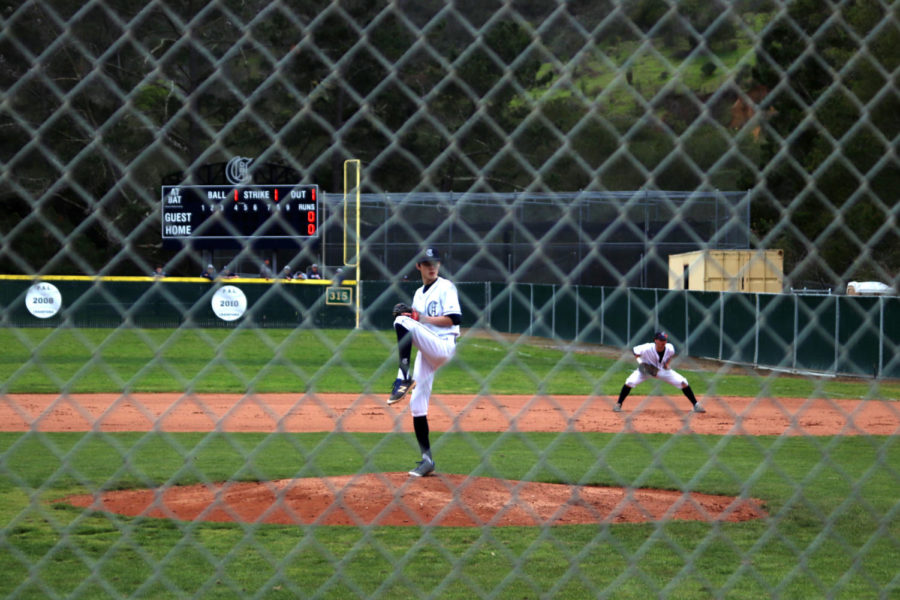 Starting pitcher Tai Takahashi, a sophomore, winds up to throw a pitch to the batter.

The Carlmont Scots JV boys baseball team suffered a 16-3 mercy-rule defeat to rival Sequoia Cherokees at home on Friday, unable to make it past the fifth inning.

Sequoia got started right off the bat, scoring five runs in the first inning off of Scot’s starting pitcher Tai Takahashi, a sophomore. Carlmont was unable to reciprocate Sequoia’s success but managed to get on the board with a two-run 2nd inning off of RBIs by freshmen Brady Greene and Tanner Van Why.

Camden Scholl, a sophomore, pitched two scoreless innings of relief including a 1-2-3 third inning. Scholl was forced out of the game in the top of the fifth inning after giving up four runs in the fourth and a few more in the fifth, being replaced by freshman Nolan Scheetz.

Sequoia pitcher Oliver Montclare, a sophomore, held the Scots to one run in three innings, not including the two runs scored in the second inning for which starting pitcher Cole Kenyon, a freshman, was responsible. Montclare closed the game out in the fifth inning, with his team up 13.

“After those two bad innings, we knew that this game was going to be what we needed to work off of, and I think most of us were pretty disappointed about losing,” said Zane Rodriguez, a sophomore.

The Scots problems weren’t just limited to their offense. A few fielding errors, as well as multiple pitches in the dirt, were significant contributions to the loss, the latter resulting directly in a few runs.

“Throwing strikes is everything. If we don’t throw strikes, the other team will score runs, and I need to be able to stop the ball if it happens to fall to the dirt,” said catcher Joey Du Bois, a sophomore.

Du Bois made an outstanding effort behind the plate but was only able to do so much.

The entire team made mistakes, something no unexpected in their first game of the year, as rain caused the cancellation of their first two games.

“We have to start working as a team and just work on fundamentals, and we will get better,” said head coach Willie Baroncini.

Despite the disappointing loss to start their season, the Scots refused to put their heads down no matter how much they were losing by. They continued to fight hard and work towards narrowing Sequoia’s lead.

“I liked the fire throughout the innings, and they never let down,” said coach Baroncini.

The Scots look to win their next game versus Half Moon Bay and turn things around.

“We just need to push the loss aside and keep working hard, practice every day, and take care of the ball,” Du Bois said.