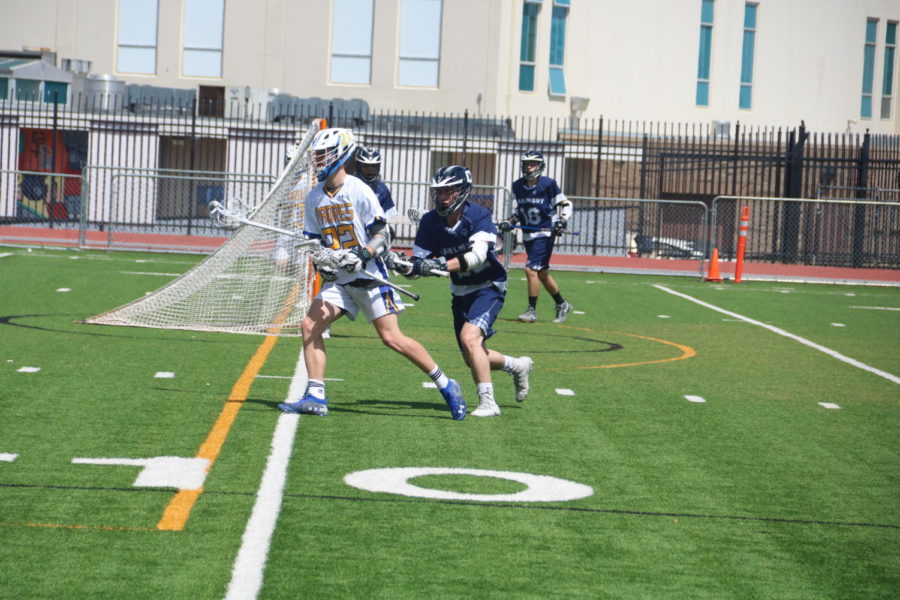 Adam Fox, a junior, chases a Serra attacker outside the crease.

The boys varsity lacrosse team was unable to catch up against the high-scoring Serra Padres in a non-conference game on Saturday, April 13.

The match, which ended with a final score of 18-6, snapped Serra’s eight-game losing streak while simultaneously extending the Scots’ losing streak to seven.

The outcome did not come as a surprise to the Scots as they were missing key defensive players in sophomore Ryan Irwin and Jackson Cook, a junior.

“We’re the underdog now because we have our top two defenders out with injuries and that will have an impact on this game,” head coach Todd Irwin said before the game.

Within the first two minutes, it was evident that it was going to be a long game without Ryan Irwin and Cook. Serra won the first face-off and calmly maintained possession until shooting and scoring to go up 1-0.

Inexperience could have been a reason for the Scots’ early faults. Due to the many impactful seniors who graduated last spring, this year’s lacrosse team is relatively young.

Despite their inexperience, Todd Irwin is looking ahead and sees promise in the underclassmen.

“We’re probably a little bit undersized, but we’ve got some great skills and we’re looking at not only this year but also investing in the future with those guys,” Todd Irwin said.

However, Serra did not care about nurturing Carlmont and instead kept their tempo pushing. The Padres easily dominated possession throughout the first quarter and frequently scored on Carlmont’s fragmented defense. The score after one was 5-0 Serra.

“They were are a lot more aggressive than we were on defense. We couldn’t do anything once they had the ball,” Nikita Smolyanoy, a junior, said. “We didn’t really put much pressure on them.”

Despite the score, it was clear just a few minutes into the second quarter that the Scots were improving.

“I want them to learn to be a bit more physical, learn more about how to move the ball quickly, be patient, and look for the right shot,” Todd Irwin said.

The physicality picked up right away in the second quarter. The Scots won their first face-off of the game and caught the Padres off guard with their hustle. Stellar ball movement led to a goal for Adrian Cunningham, a senior, which was assisted by sophomore Trevor Douglis.

The Scots racked up three more goals in the second quarter, all of which came within a two-minute span. First Douglis, then Nathan Durrans, a senior, and finally sophomore J.J. Leavitt.

The Scots worked hard to outscore the Padres by one goal in the second quarter, making the score at the end of the first half 8-4 Serra.

The second half was much the same as the first: Serra domination with glimmers of Carlmont hope. Every time the Scots put a goal or two in the net, the Padres came right back with goals of their own.

With their two starting defenders out, freshman goalie Jamison Blackwell took the forefront of the Padres’ attacks.

“If everyone was healthy, I think our defense would be a lot better, and I think we would get a lot more ground balls and better clears,” Blackwell said.

The final score of the match was a disappointing 18-6 loss for the Scots.

Despite the loss, the team’s overall goal remains possible.

Douglis said, “The only remaining goal for this team is to secure the Carl-Seq Cup against Sequoia which Carlmont has had possession of in all its entire nine-year existence.”

The Carl-Seq Cup is a trophy that is shared between Carlmont and Sequoia and given to whichever team wins by more goals in the two rivalry matches.

Carlmont lost to Sequoia earlier in the season by only one goal. This mean, in order to maintain ownership of the Carl-Seq Cup, Carlmont will aim to defeat Sequoia by two or more goals.

The final matchup between the two teams will be played at Sequoia on April 18, where the Scots will look to win by two goals and retain possession of the Carl-Seq cup.

Before that, Carlmont will attempt to end their losing streak versus Los Gatos on April 16.

Serra will look to create a winning streak against St. Ignatius on April 24.

Even though the Scots are not having the best season, many of the players believe this year is about building an excellent structure for next year.

“This is a very young team, and we will only be getting better in the years to come,” Douglis said.