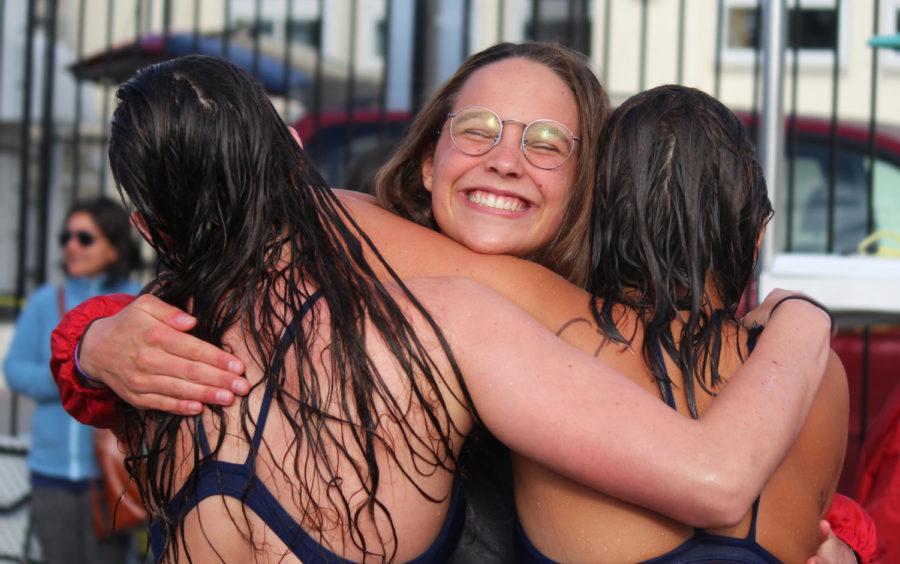 Rachel McCrea, a freshman on the JV girls' team, embraces her teammates after the Scots take all four PAL titles at the Bay Division finals. "I'm just so happy and sad that today is over," McCrea said. "I will never forget this moment."

Two years ago, winning all four PAL titles would be unheard of.

However, after years of hard work, that once far-fetched dream became a reality when not one, not two, but all four Carlmont swim teams won first place at the PAL Bay Division finals on May 5.

Through team cheers and tears of happiness, the Scots pushed through, stacking up points and breaking personal records (PRs) throughout the day.

After placing first in both heats in the 4×200 medley relay, the JV girls were off to a great start.

Unlike the boys’ varsity team who had won the PAL title two years in a row, the JV girls had yet to win a first place title. However, the girls were confident that this year would be the year that they start their own winning streak.

Likewise, the JV boys had a rough start when the freshman 200-yard medley relay team of Daniel Kogan, Brennan Dai, Greg McCulloh, and Zach Nathan was disqualified for a false start.

“We’re losing by around 20 points because we got disqualified in the first relay, but I think we can bring it back. We’re going to have to place first in our relays through,” Nathan said after the relay.

JV coach Jim Kelly was confident in the JV girls team and believed that both varsity teams could win even if it was going to be tight against Menlo-Atherton (M-A). But after the JV boys’ disqualification and lack of first place winners, he was unsure whether they could bring it back.

“Boys’ JV is a very small team so they don’t have any margin for error and they’ve already made one big error. Cost us 30 points […] a bunch of freshman boys,” Jim Kelly laughed.

Though some may have thought the boys were doomed to a second place win, little by little, individual points gained by freshmen swimmers such as Khai Kober who won first in the 200-yard freestyle and Vyas Kepler who placed first in the 100-yard individual medley allowed the JV boys to pass M-A by a small margin.

Both varsity teams started off slow with Carlmont placing fourth for the girls’ varsity 200-yard medley relay and the boys placing third, but the Scots quickly bounced back and took the lead.

Varsity swimmer freshman Morgan Hawes was among the fastest of the Carlmont girls placing first in the 100-yard freestyle with a time of 52.78 seconds and second in the 200-yard freestyle.

“So far, I placed second and broke my PR for the 200-yard freestyle and looking at the points, I think they’re adding up really well,” Hawes said. “We’re really going to make history today and I’m honestly super excited.”

Although the Carlmont swim team is filled with talented swimmers, Carlmont alumni Lukas Kelly believes that team spirit is what contributed the most to Carlmont’s success.

”My first two years [on the team] was not the best experience. We had no team spirit and we were not as successful because of that,” Lukas Kelly said. “We have a lot of talented swimmers today, but we had talent in the past as well. Without the spirit, we just couldn’t make it to the top.”

Coach Jim Kelly agrees with his son in that it’s the spirit that contributes the most to Carlmont’s performance.

“The comradery, the team spirit, that to me is one of the most important things that they can have because for the whole season, win or lose, no matter how fast they swim what they are going to remember in 15 to 20 years are the teammates and the bonds that they had with them,” Jim Kelly said.

That team spirit could be seen throughout the meet as iconic Scot cheers echoed through the swim courts, encouraging their teammates to finish strong.

Once the meet came to a close and it was time for the final scores to be announced, the Scots gathered around to hear their results.

Varsity boys were the last to be announced and ended with 559 points, 156 points ahead of M-A.

Immediately following the announcement, tears began to fall as swimmers embraced each other. Others decided to jump into the pool to celebrate and soon enough almost all of the Carlmont swim team was in the pool, including coach Jim Kelly and varsity coach Fred Farley.

“I’m really tired but I’m happy that this is how I finish my swim season and swim career,” Edison Bai, a senior, said. “I only started swimming last year, but from talking to some other people that have been here for four years I know for a fact that they have been waiting for this day, the day that we just wipe out all of the other schools.”

As a coach for more than 20 years, seeing the Scots win all four PAL titles is almost surreal for coach Jim Kelly.

“It’s amazing, for years we were the ones listening to the winning team cheer and for me, that was always a huge motivation,” Jim Kelly said.

“You know, one thing that I always tell my swimmers is that we have to outwork our opponents in practice each day and I know we do that. Every once and a while, I step back at practice and just look at the whole pool and realize just how strong we are.”

They are strong enough to make history and a legacy that will last a lifetime.