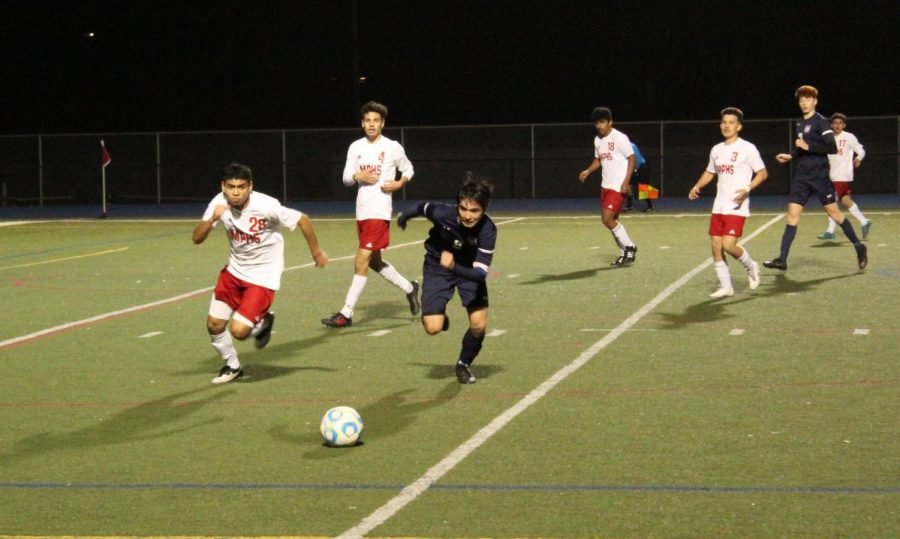 Danny Wilson, a senior, races a Mt. Pleasant defender to the ball during the second half. Mt. Pleasant would defeat Carlmont 2-0 to advance to the semifinals of Division II CCS.

The boys varsity soccer team was held goalless against the Mt. Pleasant Cardinals in the first round of Central Coast Section (CCS) play, eventually losing 2-0 to the lower-seeded team.

The loss comes amidst an impressive season for the Scots, as they finished second in the Peninsula Athletic League (PAL) and received a No. 3 seed in the Division II CCS bracket. The Cardinals, suffering only one loss all season, went into Saturday night’s game with a No. 6 seed.

Despite being the lower seed, the Cardinals were determined to make their presence known in front of the Carlmont crowd. And they did just that early, coming out aggressive in the opening minutes. The Cardinals’ high press did well to limit Carlmont’s ability to create a rhythm, and their fast-paced counterattack kept the Scots on their heels for much of the early portion of the game.

“They were fast, physical, and they got good touch. They worked really hard and they wanted it too,” said Devin Billingsley, a Carlmont senior.

The Cardinals’ aggressive play seemed to overpower the Carlmont for much of the first half, forcing poor clearances out of Carlmont’s backline. Carlmont’s early lack of defensive integrity would come back to bite them in the 10th minute when a poor clearance resulted in a Mt. Pleasant attack on the wing.

The goal occurred when a cross from Mt. Pleasant’s Ricardo Tovar Herrera, a junior, landed by the foot of Michael Molina, a senior, at the back post. Molina was able to easily tap the ball through the net and give Mt. Pleasant the lead and the momentum.

“They’re in a B-league playing the third seed from an A-league, so of course they’re going to come out all guns blazing,” Billingsley said.

In addition to assisting the team’s first goal, much of Mt. Pleasant’s attack revolved around striker and co-captain Herrera. Herrera was able to work in tandem with Eric Enow, a junior, to create chances off of through balls.

As the first half progressed, the Scots were able to better settle into the game, taking control of the Cardinals’ through balls and creating attacking chances of their own. To make their opportunities, Carlmont looked to better utilize their wingers in their forward attacks.

Noah Chang-Linenberg, a senior, and Dylan Roskind, a junior, effectively drew the Cardinals defense wider, creating more space for Patrik Dufalt-Geleziunas, a senior, at the top.

“It definitely led to more combination play in the attack which gave us shooting opportunities, even if there weren’t that many solid ones,” said Fletcher Smith, a junior.

With Carlmont settling into their offense, the game seemed to be heading into halftime with a 1-0 scoreline. However, during the final seconds of stoppage time, Mt. Pleasant was able to sneak a second goal past the Carlmont backline, this time coming from the foot of Alex Antonelli, a senior.

Despite the worsening scoreline, the deficit gave the Scots more incentive to attack in the second half.

“The goal put a little more intensity in our game, which although didn’t lead to us coming back to it, made us come back play by play better in the second half and helped our overall game,” Smith said.

The 2-0 scoreline at the end of the first half would not change for the remainder of the game. The second half brought mostly a back-and-forth of possession, although the momentum continued to favor the Cardinals.

Arguably the most significant moment of the second half came just 10 minutes in when Carlmont was awarded a penalty due to a handball. What seemed like Carlmont’s perfect opportunity to get themselves back in the game only made them feel more out of it when Mt. Pleasant’s goalkeeper, Julian Escobar, a senior, saved Dufalt-Geleziunas’ penalty attempt.

“I feel like as soon we missed that, we kind of got down and our intensity got messed up after that,” said Kelyan Taylor, a senior.

The Cardinals did well to keep a clean sheet as Carlmont’s desperation grew in the game’s final minutes. With a final score of 2-0, the Mt. Pleasant Cardinals will face the No. 2 seeded Leigh Longhorns in the semifinals on Feb. 26.

For Carlmont, the loss marks the end of a successful yet bittersweet season. For many, the loss against Mt. Pleasant was their last game in a Carlmont uniform.

“There are a lot of seniors leaving us, a lot of friends. And although I have another year to play, you can never recreate a team so it’s kind of sad,” Smith said.