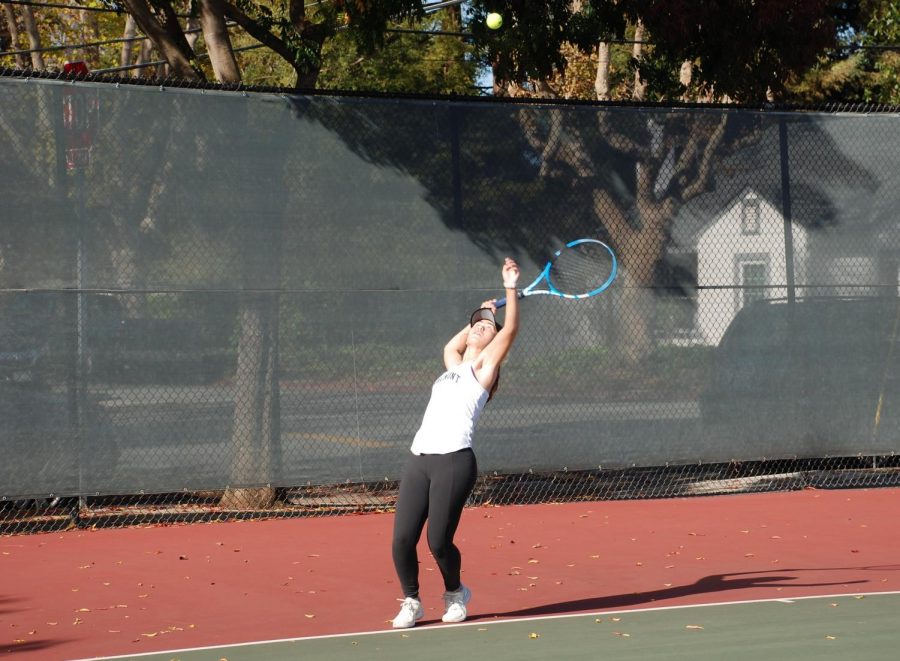 A Carlmont girls tennis doubles team took second place in the Peninsula Athletic League (PAL) Championships due to a premature ending in the third and final set.

Star player and senior Victoria Gittoes came down with shortness of breath during the beginning of the third set of the championship match, leaving her unable to continue playing. The Scots’ pairing, consisting of Gittoes and senior Nikhila Raman, forfeited to their opponents Tessa Ellingson and Lila Motamedi of the Menlo-Atherton Bears.

Gittoes’ predicament left the opposing players and audience stunned in what had been a highly competitive and close-scoring match up to that point. Carlmont had won the first set 7-5, which contained many back-and-forth rallies between the competitors. The Bears countered in the second set by jumping out to a 2-0 game lead, which the Scots eventually lost 6-3. Finally, in the third set, the Scots were down 1-0 when they decided to forfeit.

Even though they didn’t win, Raman was still pleased by the effort she and Gittoes put in.

“Victoria and I haven’t played much together, but we were able to step it up, work together, and have fun. Honestly, I’m really proud of how we were able to gel together and make CCS (Central Coast Sectionals) for the first time in my four years on the team,” Raman said.

The PAL Championships were different from a regular tennis match, as each participating school could only designate up to two singles players and two doubles teams to represent their school. The Scots chose freshmen Chloe Khachadourian and Ashwika Narayan as their singles competitors, and juniors Brooke Franaszek and Lisa Borchelt, along with Gittoes and Raman, as their doubles competitors.

To go with Gittoes and Raman’s second-place finish, Franaszek and Borchelt finished in fourth place in the doubles tournament, losing by sets of 6-4 and 6-3 to Charlotte Ragozin and Norah Lynch of the Half Moon Bay Cougars. In the singles tournament, Narayan made it to the Round of 16, while Khachadourian made it to the quarterfinals.

Franaszek was content with her and Borchelt’s performance during the tournament, considering the circumstances they faced.

“Many of the other doubles who were playing were singles players as doubles teams, so I think we did pretty well, and we worked well together like we usually do,” Franaszek said.

“I am so proud of the grit and determination my players have. They play through unbelievable obstacles to achieve success,” Goldsmith said.

The Scots’ next and final matches are in the CCS playoffs on Nov. 8, which they earned from a prior victory over the Burlingame Panthers.

“I’m excited for CCS because we [Carlmont] work well together as a team, and we practice almost every day. Coach Margaret also gives us little tips and strategies, which helps our performance a lot,” Franaszek said.