Scots showcase skill in a night of music 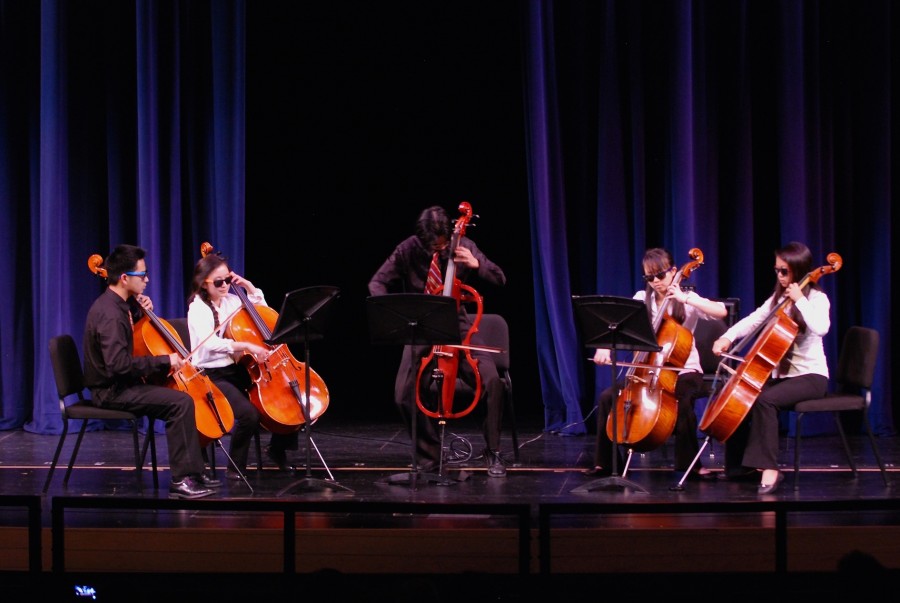 A cello quintet performs The Final Countdown by Europe. The performance was arranged by senior Brian Cheung, who was featured on this piece on the electric cello.

Where else can you find a trombone-flute duet, two snazzy jazz combos, student-arranged music, and a cello quintet featuring an electric cello?

Carlmont Instrumental Music’s annual Chamber Music Night boasted all of these and more on Feb. 26 in a concert of soloists and small groups performing everything from jazz, to classical, to rock. The event included performances by students in the Instrumental Music program, but with much more diverse content than the usual concerts.

The night started off with movement one of “Sonata in A Minor” by Cesar Franck, performed by violin soloist junior Siobhan Ang. Ang was accompanied by pianist Anna Khaydarova, who accompanied the first five performances by different soloists on music ranging from a Brahms clarinet Sonata, played by senior Sam Triest, to “Schindler’s List,” played by senior Kelly Song on violin.

“It was awesome to see all the raw talent we have in the program,” said junior Matt Bowker, who played bari sax in a jazz combo called The Archdukes of Jazz. “My favorite part of the night was just being with the band, because this whole program really is just like a big family.”

All of the soloists played with skill and confidence, giving the music life. Instrumental Music director John DaBaldo announced each performer before they stepped onstage with a short description of their role in the instrumental music program, as well as reading out some of the “shoutouts” that were a prototype fundraiser for this concert.

The first half of the night ended with a piece called “The Penguin” by R. Scott, arranged by Cohan. The piece was performed by Song and sophomore Mikayla Cheng on violin, freshman Yannie Lam on viola, and senior Brian Cheung on cello.

“I liked ‘The Penguin’ a lot because it was rhythmically and tonally unpredictable, which was really cool and different to hear. It kept you on the edge of your seat,” said senior Kendall Kaufmann, a Symphony Orchestra French horn player who was in the audience for the night.

Intermission included abundant platters of finger foods for the audience to enjoy, including both savory foods like mini pizzas and sandwiches as well as sweets like cupcakes, cookies, tortes, and fruits.

After filling up on goodies, the audience reentered the PAC for a second round of music. The second half of the concert included more unusual music right off the bat, starting off with an entirely double reed ensemble: five students on oboe and English horn, and two on bassoon. The ensemble played “Partie No. 1” by Johann Krieger for a sprightly Baroque welcome back to the stage.

The second half of the night also included two pieces arranged by sophomore Jenna Williamson, who played French horn, flute, and percussion in three different ensembles. The first was a woodwind ensemble arrangement of “Somewhere Out There” from the 1986 movie “An American Tail,” and the second was a percussion trio rendition of Scott Joplin’s famous “Maple Leaf Rag.”

“Everybody was great tonight,” said assistant music director Lieven Smart. “There was a great variety of music, and student arrangements are always fun.”

Chamber Night continued its unique vibe with a modern rendition of Pachelbel’s “Canon in D” played in a string quartet including electric cello and violin, as well as a cello quintet rocking out on “The Final Countdown” by Europe arranged by Cheung, who was featured on electric cello in both ensembles.

The night of music drew to a close with two high-energy jazz combos. The Archdukes of Jazz went up first, consisting of a sextet of four saxophones, electric bass, and drums. The Archdukes performed with flair on the Duke Ellington chart “Caravan.”

“We were brainstorming for a name, and I just told Olivia [the bass player] not to think about it and pick a word,” said Bowker when asked about their group’s title. “She said, ‘archduke,’ and I said, ‘Okay, Archdukes of Jazz it is then.'”

The final combo of freshman Zack Shubert, sophomore Dante Billeci, and senior Gustaf Claesson wrapped up the night with an upbeat, improvisationally-packed chart called “Stompin’ at the Savoy” by Edgar Sampson. The group had charisma onstage, interacting with each other on call-and-response improv solos and clearly enjoying their music.

“We’ve never had electric strings in Chamber Music Night before, so that was a new dynamic tonight. The jazz tunes had great energy, and tonight’s soloists were all at a very high level,” said Smart. “There are always things to tweak to improve even more, but all in all, the night went really well.”

Chamber Music Night is an opportunity for the instrumentalists of Carlmont to experiment, create, and share their varied musical talents in out-of-the-box ways.