Scots shut out Mustangs in a commanding performance 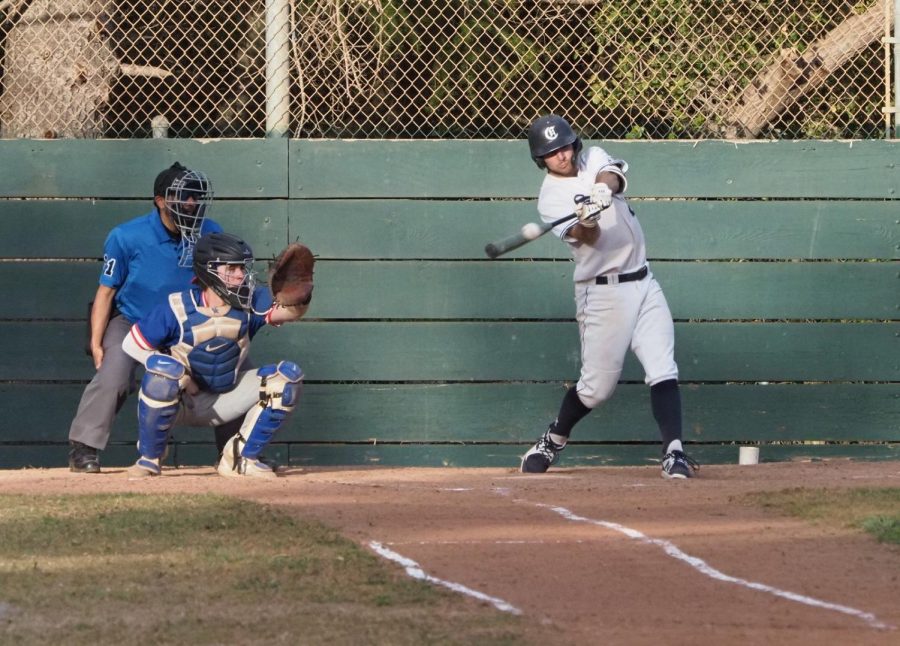 Senior Tanner Van Why gets a base hit in a game against St. Ignatius.

Carlmont’s varsity baseball team now stands alone in first after a pair of home runs and a lights-out pitching performance led to a 4-0 win at home against Capuchino on Friday.

Tripp Garrish, a senior pitcher and outfielder, completed a complete game shutout against Capuchino, dominating on the mound through all seven innings. Garrish also continues to impress at the plate, leading the league with a .526 batting average and leading the team with four home runs.

“My game plan was just to attack early, pound the strike zone, and let the defense work, and that’s exactly what I did,” Garrish said. “I got the contact, and the guys made plays behind me, so that’s all I could really ask for.”

At the top of the pitching order, Garrish and senior Colten Fischer have both boasted 2.05 ERAs. With valuable improvements in pitching, they have benefited from the team’s depth in the bullpen and starting rotation.

Ryan Hamilton, Carlmont’s head coach, said, “Our defense and pitching have greatly improved. We’re very deep on our pitching staff, so we can have guys come into games to relieve, or you can even start guys who might not be our top two starters.”

Along with their impressive pitching, junior shortstop Jack Wiessinger and senior second baseman Aidan Kurt have been able to lock down on defense for the Scots in the middle infield. The outfielders, including Garrish and fellow seniors Tanner Van Why, Carson Vance, and Colin O’Driscoll, have also played strong defense and provided a lot of power at the plate, making up the top of Carlmont’s batting order.

The Scots could not figure out the Mustangs in the opening two innings, but an RBI double from Van Why opened the scoring in the bottom of the third. From then, solo homers from Kurt and senior infielder Brady Green helped Carlmont achieve a commanding victory on both sides of the ball.

“It was a bit of a grind trying to figure them out offensively, but I think after about the third inning, we started making adjustments and understanding what he was trying to do and what pitches he was going to throw before he threw,” Hamilton said.

Carlmont’s game against the Mustangs marked their sweep of the two-game series, and they are now entering the final week of their campaign in the Peninsula Athletic League, facing off against third-place Sequoia. The Scots stand at a league-high 10-2 record with two more games to go before playoffs, followed by Burlingame in second, who is 9-3 and facing fourth-place Menlo-Atherton.

“We’ve been moving in an upward trajectory the whole year,” Kurt said. “That was the goal from the start, and I feel like we’ve done that. By doing that, I think it’s gonna be exciting and fun to watch.”

The plan for Carlmont from here is to continue building on the season they’ve had and allow their positive momentum to carry them into the Central Coast Section playoffs (CCS), which they have been targeting as their ultimate objective from the beginning of the season.

The Scots dominated the Mustangs to reach double digits in wins, and as the league gets wrapped up, their focus turns to try to send off their impressive class of seniors with a CCS title.

“We’re just fixing the little things like mistakes in practice and things that show up in our games,” Hamilton said. “We’re trying to make sure that everything is completely right as we enter playoffs.”