Scots sink the competition in a historic win 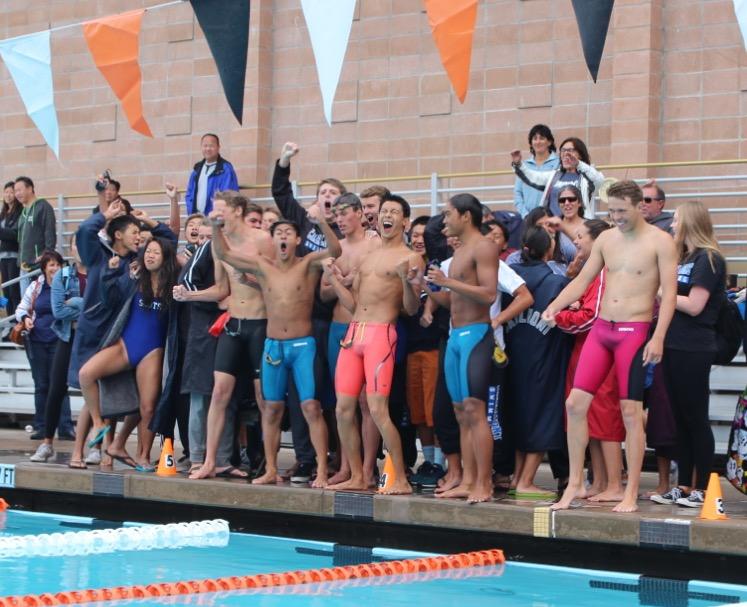 Boys varsity's deafening cheers drown out the announcer as he delivers the news that Carlmont wins.

At the end of the day, the swimmers were the ones cheering from the pool deck and the coaches were celebrating in the pool.

On May 7, the boys varsity swim team won the Peninsula Athletic League (PAL) championships for the first time in Carlmont swimming history.

After the upsetting two-point loss last year to rival Menlo-Atherton, the boys started this season off determined to prove that they were swimming for no less than an undefeated season.

Going into the PAL championships, the boys were undefeated the whole season. They intended to keep it that way, refusing to have a repeat of last year’s lost. After the preliminaries on May 5, many of the boys had qualified for the finals, putting the Scots in a secure place to win the meet easily.

However, the finals had a grim start for the Scots, with freshman Justin Hsu losing his goggles on the breaststroke leg of the 200 medley relay and finishing in an unsatisfying fourth place.

“It was pretty bad, but I got over it because my team needed me, and I ended up having a really good [swim] on my 100 breaststroke,” said Hsu.

The meet quickly turned around with junior Stuart Vickery placing third in the 200 freestyle, sophomore Joshua Camerino placing second in the 200 individual medley, and senior Alexander Chan tying for first in the 50 freestyle.

“As far as being a leader goes, I was trying to set more of an example through my swimming and keep everybody motivated and focused throughout the meet,” said Chan.

With these critical wins, the boys varsity team dominated the meet, scoring 568.5 points and beating the second place team of Menlo-Atherton by 162.5 points for a landslide win.

“Winning PALs for the first time and making Carlmont history is definitely something we’ve worked towards this entire season. Knowing that we achieved our dream through hard work and all those hard practices, it feels great to have finally won,” said Camerino.

The swimmers were not the only ones whose work went into achieving this dream — this win was rooted in the coaching duo of JV coach Jim Kelly and varsity coach Fred Farley.

“This year, we had one workout that Fred would write for varsity, and we used it across all four teams. We were basically one big program, and that allowed me to not only just coach with JV, but also help out with varsity,” said Kelly.

This win might not have happened without the dedication of both coaches as well as the coaching expertise of Farley.

“This year, the team was much more focused, dedicated, and everybody was committed to making this season a really great season,” said Farley.

Although Farley claims that the team’s focus played a big part in the victory, many swimmers believe that the focus came from the certain work ethic it took to be champions, which Farley lectured about at practices.

“Whenever one of us would suggest that we go on a hike to get some exercise instead of practicing in the pool, Fred would respond with, ‘Do you think [Menlo-Atherton] is skipping practice right now?'” said junior Owen Mastalir.

With the season finishing off with CCS on May 13, the swimmers and coaches are beginning to think about how next season will play out.

“We’re sitting in a really strong position. We’re only losing a couple of seniors from this year’s team, and we’ve got some strong kids coming in. I think we’ll be able to challenge for the title again,” said Farley.