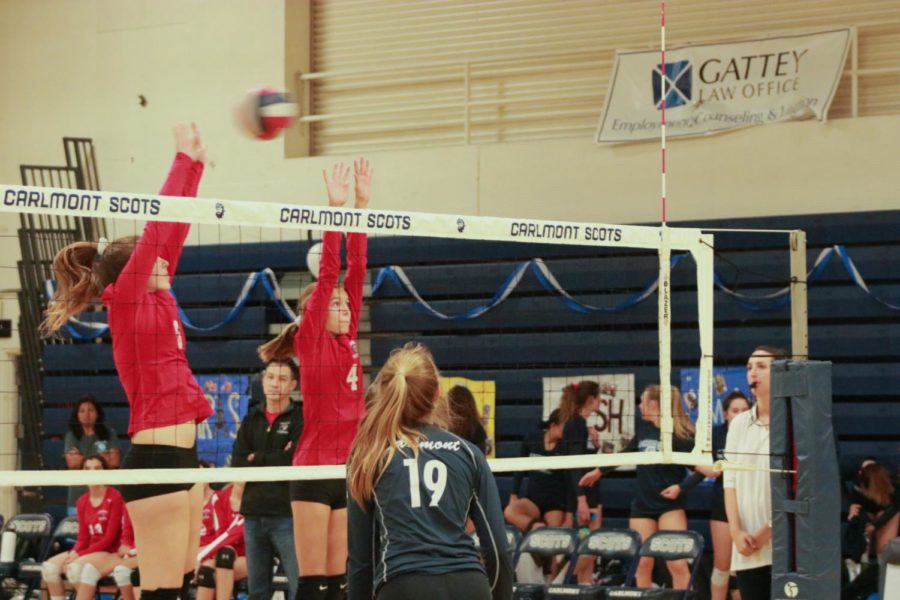 The Panthers miss a block after a spike from Rachel Reed.

Carlmont’s freshman girls volleyball team walked away triumphantly after defeating the Burlingame Panthers in both sets of an outstandingly quick match.

On Oct. 29, the Scots dominated the Panthers in their final game of the season, winning 25-11 in the first set and 25-13 in the second. In just 35 minutes, the Scots were able to take home the last of many wins for this fall.

“We could’ve done better in the second set, but otherwise, I’m really proud of [the Scots] and how we played this season. I think [the season] went really well,” middle blocker Maddy Mercardo said.

The girls took a hefty lead throughout the entirety of the game, keeping an average of around 15 points ahead of the Panthers. This advantage can be significantly credited to Rachel Reed, whose aggressive and accurate spikes scored numerous points for the team throughout both sets.

Their lead started to taper during the second set when the girls lowered their focus, allowing the opposition to catch up. But after a time-out, the girls got their heads in the game and managed to take their second victory against Burlingame this fall.

“We were kind of always one step away from the ball, and I think we could’ve won if not for that. Last time [the Scots] beat us by a lot, and so they’re a really good team,” said Bridget Aggen, a Burlingame player.

Despite the win, the Scots still put on a sad smile during their last team meeting, as it signaled the end of their season.

“We all grew together as a team, and we bonded really well and made a lot of memories. Most of my friends are from sports, and its really nice seeing familiar faces on campus. I love being able to see [the team] and get a hug,” Mercardo said.

The Scots will now continue to work hard in preparation for next year’s JV volleyball tryouts and for their club volleyball season.