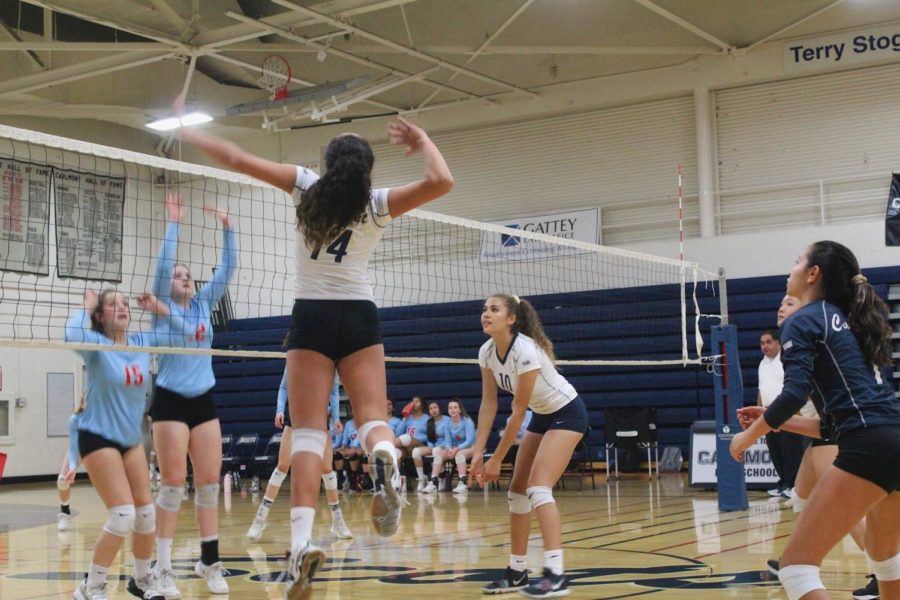 Freshman Curly Raddavero spikes a ball, scoring a point for the Scots.

Carlmont girls JV volleyball team encountered a head-to-head clash with the Hillsdale Knights, triumphant only due to their sudden surge of spirit.

The Scots started the game off strong on Oct. 8, winning the first set 25-17 and 28-26 in the second. Expecting little from the opposing team, Carlmont let their guard down, allowing Hillsdale to catch up.

The Scots did not play up to par despite their spirited reputation and their 7-1 record.

Libero and sophomore Keani Haake said, “We were definitely playing down to their level a lot, and we should have beat them easily … In the second set, our energy and spirit weren’t there as much as it was the first, and I feel like that’s what contributed to us not playing as well.”

The team was said to be not as loud and competitive as usual, that is until Hillsdale was in the lead 19-18 in the second set. Coach Irene Oliveira, who generously subbed in after the previous coach was fired, called a time-out to get the team back on their feet. This break, combined with the team’s competitiveness, issued a surge of spirit and motivation in the girls.

Despite them being in the loss, Hillsdale kept a positive attitude throughout the match and cheered loudly for their players. Their spirit helped them not to get discouraged by the results of the first set and play harder in the second, ultimately leading to a competitive battle between the two schools.

Anneke Hollis, a junior and Hillsdale’s team captain, said, “Being captain, seeing my team grow is so important to me. It’s amazing to see them play even when we don’t win. We started to lower our confidence as we started to lose and look at the score, which I was disappointed in, but we kept up our energy the entire game.”

The Scots almost let the Knights win the second set. But with newfound motivation, the Scots were able to come back during the final minutes of the second set. The final score was 28-26, with five additional rallies to the usual 25-point mark, allowing the Scots to emerge victoriously.

Joselyn Moore, a sophomore and middle-blocker, said, “Spirit makes the game, as when we have more spirit, we come together as a team, and we work together better.”

The Scots will play Aragon High School next on Oct. 10.