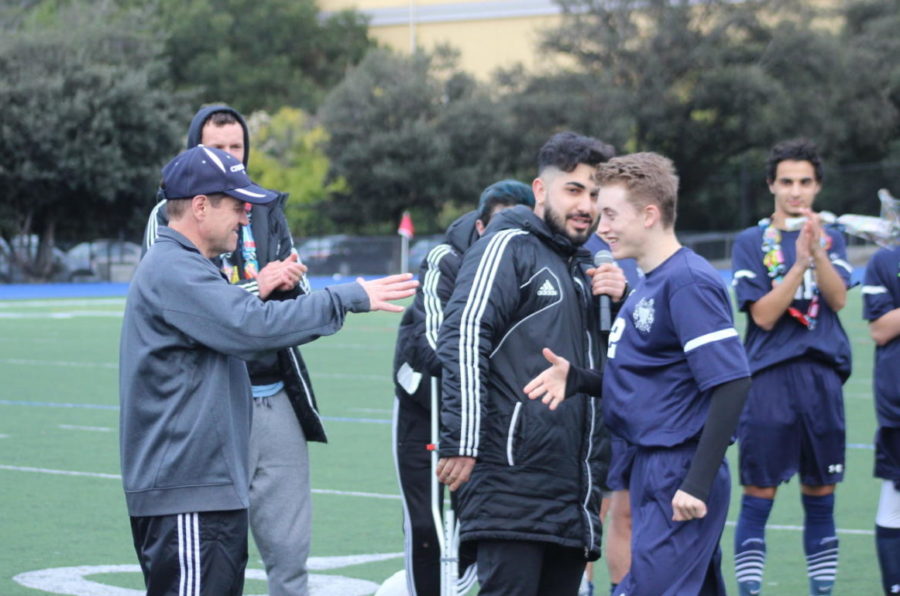 Gavin Blodgett, a senior, is congratulated by a coach during his senior night ceremony.

Despite their loss, the team still had a positive senior night as they advanced to CCS playoffs.

Many of the seniors would start their last game, and the entire team was excited to go out and play.

“Senior night is awesome. The boys are pumped. With our position in CCS, we have extra motivation to show up tonight,” said varsity assistant coach Ozhan Ghajar-Nouri.

The Scots motivation showed early in the match, too, with Carlmont maintaining the overwhelming majority of possession throughout the first half.

Many of the Scots’ early attacks revolved around Nofal, who consistently gave his teammates good chances to score.

“Muaath is a goalscorer, a locker room presence, the kind of guy that people rally around,” Ghajar-Nouri said. “He does the good things.”

Nofal worked in tandem with Crame to keep the pressure on Aragon’s defense in the first half. The two have been playing together since sixth grade and have created a chemistry that is hard to stop.

“Every time he gets the ball, he passes it to me and he’ll make a run through. I’ll always find him and he’ll always beat his player,” Nofal said.

Despite duo’s best efforts, Aragon was able to hold on the entire first half, leaving the score at halftime 0-0.

“We were definitely feeling that we should’ve had a goal,” Shehadeh said. “But we weren’t upset because we knew we still had another half to go.”

The second half continued the Scots domination, with a quick run by Nofal eventually being stopped by the Dons.

Freshman midfielder Ryan Yang did well to draw fouls and push the ball forward, but Carlmont still could not find the back of the net.

“In the second half, we started isolating each other and working by ourselves and we weren’t close so we were just going one on one,” Nofal said.

Then, a seemingly slow attack from Aragon in the 63rd minute gave Marcos Alvarez-Barragan, a senior, a shot on goal from outside the box. The shot bent from right to left over the keeper to give Aragon a 1-0.

The pressure was now on the Scots.

With the clock winding down, Carlmont became more desperate to score and allowed the Dons to take control of possession momentarily.

The Scots’ final ten minutes were spent pressuring the ball and sending all men forward towards goal. Despite Carlmont’s best efforts, Aragon was able to hold on to their goal and win the game 1-0.

“We got a little tired and our legs were gone so we just couldn’t finish,” Nofal said.

Even with the loss, the Scots will advance to CCS. The seeding committee will meet Thursday, Feb. 14, where Carlmont will look to get a positive seeding. The team’s first playoff game will most likely be on Saturday, Feb. 16.

After the game, the primary feeling was that more work had to be done prior to CCS. As a result of a lack of field time, the team has only been practicing once a week. The boys are excited to put in more work ahead of their playoff run.

“We just got to do more work, practice more, touch the ball more,” said Kelyan Taylor, a junior. “And that’s what we’re going to do.”